A 22 year old man spotted selling hard drugs near the Gloucester Rugby stadium tried in vain to escape police officers by pushing his bike at them and running off, a court heard on Friday (July 2). 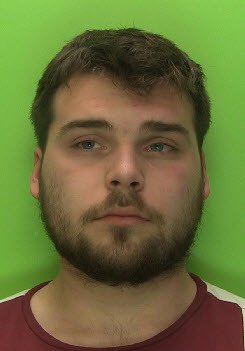 Frasier Chapman did not get far, however, before he was caught by an officer and arrested, Gloucester crown court was told.

Chapman, of St Paul's Road Gloucester, admitted being in possession of heroin and cocaine with intent to supply on May 25 this year 2021 and was given a 2 year jail sentence suspended for two years.

Prosecutor Kannan Siva said plain clothes officers on patrol on May 25 saw a number of people, including several known drug users, congregating in an alleyway between Dean's Walk and Mercia Road.

Mr Siva said: "The police observed Chapman making an exchange with a known drug user and he was challenged by the officers. He tried to escape by pushing his bicycle towards them and running off. But he didn't get very far before he was apprehended.

"He was searched and found to have 35 wraps of heroin and 11 wraps of crack cocaine on him, along with and an old-style mobile phone which was ringing when he was arrested. These drugs were valued at £460 in street deals. He also had almost £90 of cash in his possession.

"Chapman was the bottom link of a chain of drug dealing. He was not the person calling the shots. He stated that the property he had been staying at in Westgate Street was where he was placed by those above him."

The court heard that Chapman later admitted in interview that he had panicked and run away. He said was only doing it for the money as he had become homeless having been released from curfew for another offence.

"Chapman stated that he was trusted and had possession of the keys to the flat," added the prosecutor.

"When police searched the Westgate Street property they found in the lounge a rucksack containing Chapman's identity documents and two large balls of Class A drugs.

"Along with the balls containing around 200 wraps of cocaine, valued at £2,000, the police discovered a set of electric scales and £940 in cash."

The Judge, Recorder James Bromige, said the amount of money found suggested that Chapman had been operational for a while.

Matthew Harbinson, defending, said: "When Chapman was placed on an electronic tag he found it difficult to gain employment. He initially moved to the Stonehouse area to try and distance himself from the people who got him involved in a public order offence.

"There was an initial suggestion that he was victim of modern slavery because of his age. However, he now has the support of his family following his exploitation.

"He has been remanded in custody on these drug charges and he has used the time wisely and it has given him the opportunity to reflect on his wrong doings.

"There is no entrenched pattern of drug behaviour in Chapman's case and he has given a full and frank admission to the police.

"He is not a habitual criminal and the prospects of rehabilitation are good. He feels that with the support of his family he can be a useful member of the community and is seeking to obtain lawful employment."

Recorder Bromige told Chapman: "You were caught in the act by the police in conducting your drug dealing.

"Your record would suggest a significant role because of the amount of money involved. You admitted you got involved because you needed money."

The judge jailed Chapman for two years but he stated that as there is a prospect of rehabilitation he felt it would be unjust not to suspend the sentence for the same time period.

Judge Bromige added: "I notice you have a desire to obtain full time employment and that you have been given an opportunity to move away and start afresh. However you will have to be punished with a home curfew for six months from 7pm to 6am, attend 20 rehabilitation activity requirement days and attend a monthly judicial review.

The judge also ordered the forfeiture of drugs and paraphernalia and mobile phones and the confiscation of the £1,029.85 cash seized to be donated to Gloucestershire Police's crime and drug prevention programme.