A 39-year-old man has been jailed after his dangerous driving in an unsafe car caused a crash which led to a scooter rider having to have his leg amputated.

The VW Golf being driven by Brooke Purdon of Garden Suburb, Dursley, Gloucestershire, had several defects at the time of the collision and they contributed to the manner of his dangerous driving, a court heard last week.

The collision happened on the A419 near Cirencester, Glos, at around 4.15pm on January 22, when Purdon collided with a scooter rider who was travelling in the opposite direction.

Purdon lost control of the Golf and careered onto the opposite side of the road, colliding with 57-year-old Stephen Tedford who was riding his Piaggio Vespa scooter. 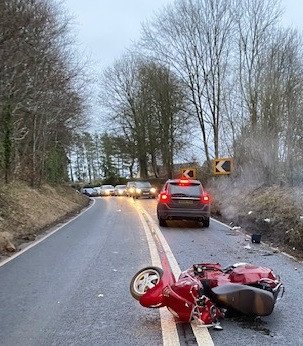 A Gloucestershire Police spokesperson said: "Mr Tedford sustained serious injuries and was taken to Southmead Hospital in Bristol by air ambulance. He was operated on and nearly lost his life to toxic shock syndrome caused by an open fracture to his leg.

"His lower right leg could not be saved, and it had to be amputated below the knee. He suffered multiple other injuries from which he is still recovering.

"Purdon's driving was described by other motorists as being erratic with him swerving and crossing the central line on multiple occasions in the lead up to the collision.

"He was not under the influence of alcohol or drugs and when spoken to by attending officers said that there were possible defects with his car.

"It was seized for an examination and multiple defects were found on the vehicle. The most significant was that three of the four suspension dampers were leaking and both front tyres were worn on the inside. This could have caused the vehicle to become unstable when driven.

"Purdon was later charged with causing serious injury by dangerous driving and he pleaded guilty to the offence at a hearing last month.

"He appeared at Bristol Crown Court last Wednesday (October 19) and was sentenced to two years and six months in prison. He was also disqualified from driving for 45 months and has to take an extended driving test after that time.

Investigating officer PC Richard Nuttall, from the Gloucestershire Police Roads Policing Unit, said: "We have highlighted this case to the public to show the dangers of driving a vehicle which is not fully roadworthy.

"By not ensuring his vehicle was fully roadworthy, Purdon has changed Mr Tedford's life causing both mental and physical scars.

"This collision could so easily have been avoided, and I am urging all motorists to check their vehicle is safe to drive before making any journey."

In a victim impact statement which was read in court, Mr Tedford spoke about how his life changed following the collision.

He said: "I have ridden a scooter since I was a teenager. To me, it's far more than just riding a scooter, being a 'scooterist' is part of my identity, part of who I am.

"The afternoon of the crash, I was off to meet my best friend who I've known since I was six years old to attend a school reunion - I'd been looking forward to it for months.

"With my loss of independence, initially not being able to drive, or go out and meet who I want, when I want, I feared the impact that would have on my wellbeing. I love people and I love life and going out and meeting friends in pubs is what I've done all my adult life.

"Since I've come home from hospital life has been incredibly different from how it was. Not just for me but also for my partner Gail.

"I remain mostly wheelchair bound as the prosthetic leg I've been provided is completely unsuitable for me and the type of amputation I've had.

"Using this leg for anything more than a few minutes leaves the scar tissue on my stump blistered and bleeding and open to infection so I've been advised not to use it too much.

"It continues to remain very evident that every single aspect - big, small and tiny - of my life (and of those around me, particularly Gail) has, and continues to be impacted.

"Life as a disabled man in his late 50s is hard, wearing and very frustrating. Sadly, this will continue for the rest of my life, without any break and all as a result of a single incident one January Saturday afternoon."

The police spokesperson added: "October is Tyre Safety Month and this case serves as a reminder of the importance of regular tyre checks, for your safety and for other road users.

"By having insufficient tread depth, you face longer stopping distances and reduced grip, which puts you and other road users in serious danger. For more visit TyreSafe.

"More information on the requirements to make your vehicle roadworthy can be seen here."