Gloucestershire County Council (GCC) is gearing up for some major resurfacing work in the south of the city during July. 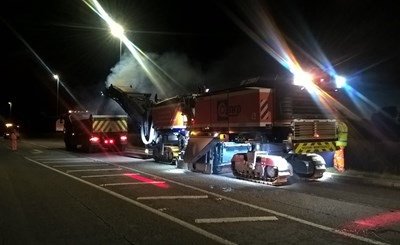 More than 3km of road is due to get a new surface on Bristol Road and the A38 Southern Connector in Gloucester, as part of what GCC is suggesting is the biggest resurfacing scheme the city has ever had.

Both schemes planned for the area will take place at the same time, aiming to reduce the amount of time major roads on the network are closed.

The work will take place at night, with the roads reopening during the day. A signed diversion suitable for all vehicles including HGVs will be in place.

GCC said businesses known to operate overnight near the scheme have had an advance warning email giving planned details and dates of the work to help them organise deliveries around the closures.

Residents in the area will also receive detailed information nearer the time, and all information will be available on the county council's website.

Cllr Vernon Smith, cabinet member for highways, said, "This work is part of our five year £150million investment into your highways. I appreciate there will be some inconvenience however it is important we invest in Gloucestershire's major roads; this is the way to eradicate potholes and reduce defects on the network, which keeps everyone moving whether for business or pleasure long term. Please keep an eye out for more details about this scheme."

Kath Haworth, head of highways at Gloucestershire County Council, said: "It's important that we give everyone as much notice as possible of major road works to help them to plan ahead, for example we know some deliveries can take place outside of normal opening hours."

All work is overnight between 7pm to 7am.

A38 Southern Connector closed in sections between Tuesday, June 29 and Friday, July 23 (excluding weekends) and Saturday, July 24 and Sunday, July 25.

The A38 Southern Connector sections are planned as follows:

Maps are below to help picture how this very large scheme will take place. The start and end dates are planned and could change. 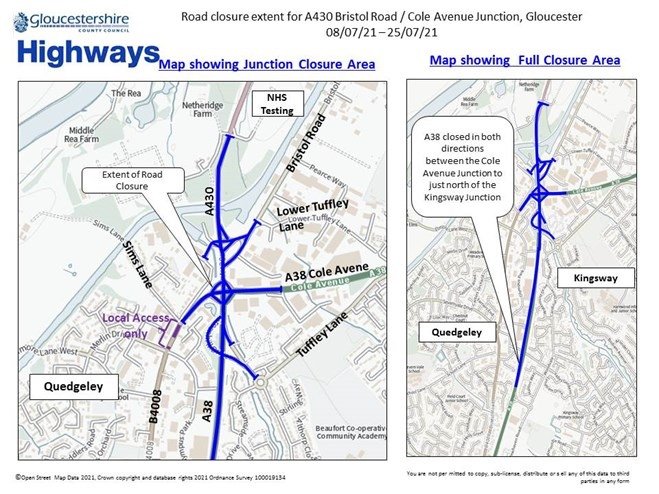 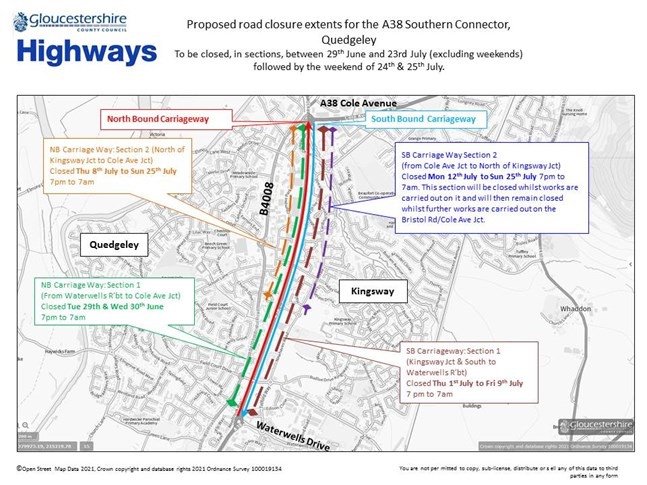 Businesses which need to get in touch with the team can email highways@gloucestershire.gov.uk.