The misuse of a recycling site in Bishop's Cleeve has led the local council to consider removing the service. 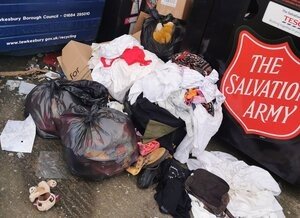 The recycling and charity collection bins in Tesco's car park in Bishop's Cleeve have been plagued by fly tippers and are being used incorrectly by some residents.

The land is owned by Tesco, but Tewkesbury Borough Council has an agreement with the supermarket to use it to offer an extension of the recycling collections from residents' homes. The Salvation Army also has a clothes bank at the site.

In recent weeks, however, the site has seen furniture, broken tents and much more dumped there, and officers investigating the issue have found that bags of recycling have not been emptied into the bins. Instead, they have been left on the ground, often over-spilling.

The council's waste contractor, Ubico, works hard to rectify the situation by emptying the recycling bins two to three times a week (other recycling sites across the borough are emptied once a week). A crew goes out every morning to clear the waste dumped at the side of the bins, which cannot then be recycled, as it has been open to the elements.

The Salvation Army empties the clothes bank three times a week. However, without the cooperation of the public, these measures are unfortunately proving inadequate.

Now the council is set to reorganise the site for a trial period, to see if it helps to improve the situation.

Cllr Jim Mason, lead member for clean and green environment at Tewkesbury Borough Council, said: "We want to offer our residents a local and convenient place to take excess recycling if blue bins at home become full. However, the recycling site at Tesco in Bishop's Cleeve is increasingly being used to dump belongings that cannot be recycled, as well as genuine recycling being left in bags on the floor instead of deposited in the bins.

"This creates an eyesore for shoppers and local residents, it ruins the quality of the recycling and has the potential to become a public health hazard if it's not corrected. These are all reasons why the council can issue fixed penalty notices to anyone who disposes of waste in this way. I sincerely hope that, by trialling a new configuration of the bins, the situation improves, and we can continue offering this service to local people."

Cllr Richard Stanley, local councillor for Cleeve West, said: "Residents have been asking for improvements to be made to this busy recycling site for some time. I would like to thank them for their patience and also thank the local volunteers who have been litter picking and cleaning up the area in their own time.

"Ubico has increased collections for this popular service, but recycling crews are not equipped to deal with fly tipped items or items left unsorted on the floor. A separate clean-up team is then dispatched, creating extra work and extra cost to the council taxpayer. I appeal for users of the site to only take the right materials to be recycled and, if the bins are full, return on a different day."

"Previous efforts to resolve the problem were only partially successful. We hope that changing the set-up will encourage responsible use of this facility, in order to keep it going. I urge all users to ensure that they place items for recycling in the designated bins only, to avoid further problems and potential fines."