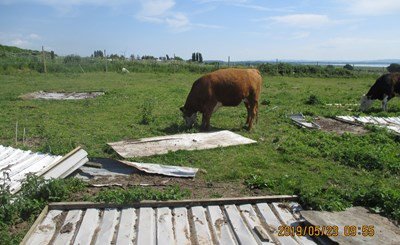 He appeared before the court on Wednesday (December 2) for sentencing and was disqualified for life from keeping livestock. The ban will take effect from 1 January 2021 to allow him to test the cattle in his possession for tuberculosis (TB) and dispose of them.

He was given a conditional discharge in relation to his offences and ordered to pay a £185 contribution towards investigation costs.

Trading standards officers visited Kerrin Farm in Woolaston on 14 February 2019 after receiving information that Curtis was keeping stock in terrible conditions, failing to keep proper records and failing to properly dispose of animal carcasses. He had accepted a caution for similar offences in 2017.

Around 30 ducks were living in cold, damp and mucky conditions littered with the carcasses of about 60 other birds. A vet from the Animal and Plant Health Agency (APHA) later confirmed that Curtis had failed in his duty of care to the ducks, which had to wade through liquid mud to get to their water trough.

• Pigs, cattle, and ducks did not have water or a dry lying area

• Cattle were housed in deep muck and had to wade through liquid slurry to get to their feed, which was mouldy hay

• Hen houses had not been cleared out for a long time; hens were fed in filthy troughs and were laying eggs in dirty nesting boxes

At the time Curtis blamed his ill health on his inability to care for his stock.

Arrangements were made to rehome a number of the ducks and poultry when trading standards officers and a vet from the APHA returned the following day.

Further breaches were also identified on later visits, including cattle being kept in a field containing hazards such as broken gates and timber with protruding nails and ducks were fed stale bread waste containing lumps of plastic.

Cllr Dave Norman, cabinet member responsible for trading standards, said: "In this case not only did the farmer fail to care properly for his livestock, but on several occasions he also showed little regard for the cleanliness and hygiene of animals which were intended for the human food chain.

"Members of the public are entitled to expect that locally produced food is farmed to a high standard of welfare and hygiene. Our officers work hard to ensure that farmers maintain these standards and take action such as this where necessary."