A pub synonymous with Gloucester rugby fans for years has been put up for sale. 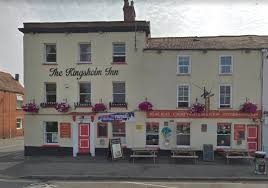 The Kingsholm Inn, commonly known as The Jockey, is directly opposite Gloucester Rugby's Kingsholm home and has long been a favourite with fans.

The pub reopened after a short closure little more than a year ago when it was among a string of venues bought by The Stonegate Pub Company from Enterprise Inns as part of £1.27billion deal.

But the freehold has been put on the market through agents Fleurets for £295,000.

Councillor Jeremy Hilton, who represents the Kingsholm and Wotton ward on Gloucester City Council and is the leader of the Liberal Democrat Group, said it was crucial for the pub to remain.

He tweeted: "What is its future? We lost the Welsh Harp to Tesco a few years back. This needs to remain and inn. Rugby fans will miss it."

The description on the agent's website said the pub had previously been held on a lease and others potential for "further development of trade, particularly in connection with the visitors to Kingsholm Stadium."

It describes The Kingsholm Inn as "a substantial end terraced building" although it hints that it was probably two separate buildings in the past.

It reads: "The ground floor contains a substantial bar servers and open plan trading areas with an outside yard/covered trade area.

"Of particular significance is the substantial upper parts which provide 10 rooms plus ancillaries, bathrooms/shower rooms offering the potential to conversion to flats/maisonettes, subject to consents."

It added: "The location has the benefit of significant additional wet trade on match days.

"The location would also suit a conversion to alternative uses such as retail or offices plus residential."

Among other features listed in the description is a skittle alley, pool table area and partially-fitted kitchen.

The area is not short of pubs with Teague's Bar and relative newcomer on Kingsholm Road close to the ground with The Coach & Horses nearby on St Catherine Street.