The glitz and glamour of 'Mr and Mrs Superdry' was laid bare in one of the colour supplements over the weekend.

Superdry mogul Julian Dunkerton and wife Jade Holland Cooper featured in a feature spread in The Times' Saturday magazine where they were introduced as "The first couple of the Cotswold set."

The couple gave writer Polly Vernon exclusive access to their empire, including No. 131, their 'Cool Hotel' in Cheltenham and their home and offices near to Dowdeswell Reservoir.

And while readers will no doubt be curious to know that their home includes the 'largest private swimming pool in the country', it also gave a rare insight to Dunkerton the businessman. 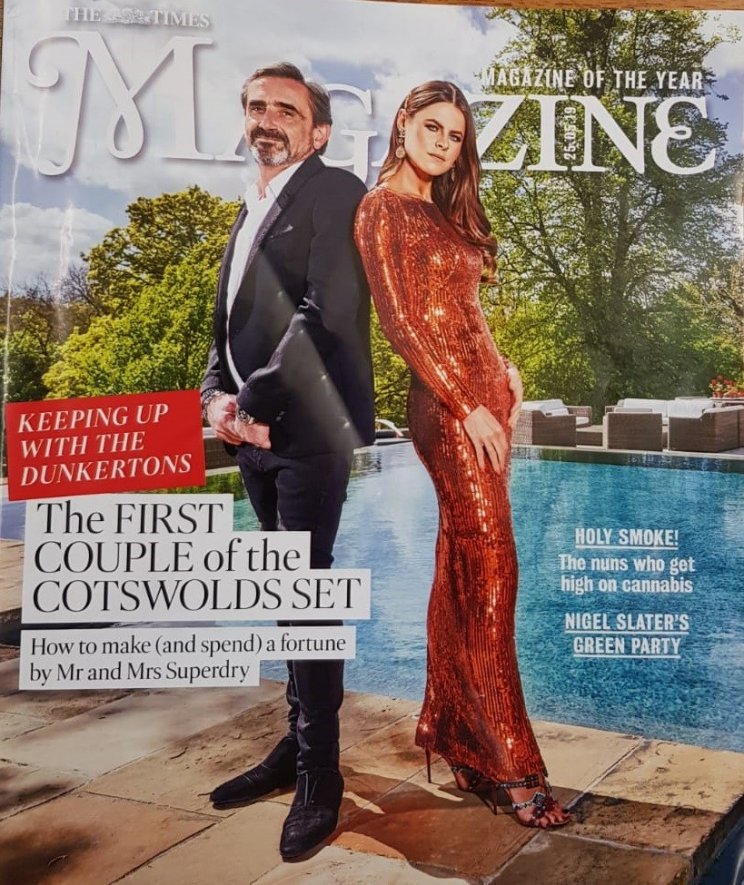 The 54-year-old, who married his 32-year-old wife in a lavish ceremony last year - apparently Idris Elba was the deejay - spoke about his humble beginnings on a Hereford market stall.

He was given a £2,000 loan by his father who ran the successful Dunkerton's Organic Cider which he paid back within months, but received other invaluable assistance from the Government.

Dunkerton explained in the interview that he was given: "a £40 a week grant from the government, which is another great idea that has been forgotten.

"The £40 a week, whatever that equivalent is now should be reinstated. The Enterprise Allowance Scheme ... Nobody actually tested whether that scheme worked and actually to my mind it did work. 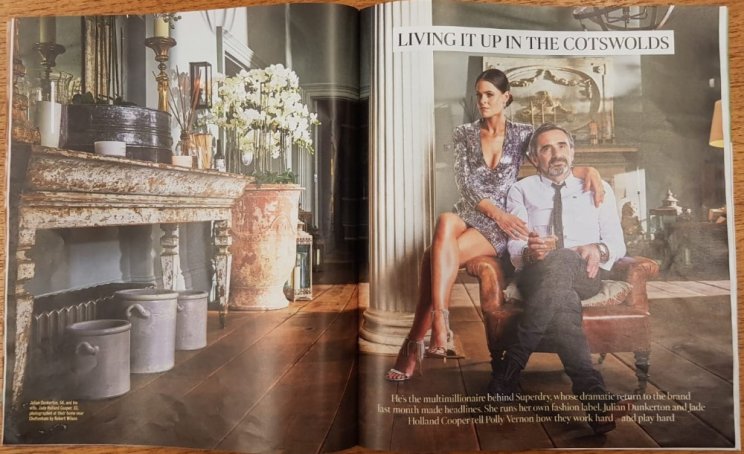 By 2010 Dunkerton had turned the market stall into Cult Clothing - his first shop on Cheltenham's High Street - and then the Superdry empire.

Superdry went public with a value of £400 million, a figure that rose to more than £1billion in its first year of trading.

That has since plummeted with shares that once changed hands for £27.04 a throw now valued at just £4.85.

That led to the bitter battle between Dunkerton - who appears from the article to be called "Jules" around the house - and the board of the company.

Eventually that led to his reinstatement to the board last month in a narrow shareholder vote that also saw the existing directors resign en masse.

His return to his clothing brand means he will have less time to build - almost literally - his empire of hotels restaurants and bars in Cheltenham.

The Lucky Onion Group own No. 131 and have recently started renovations on the George Hotel, leading the writer to make the bold claim that locals call Cheltenham, "Dunker-Town." 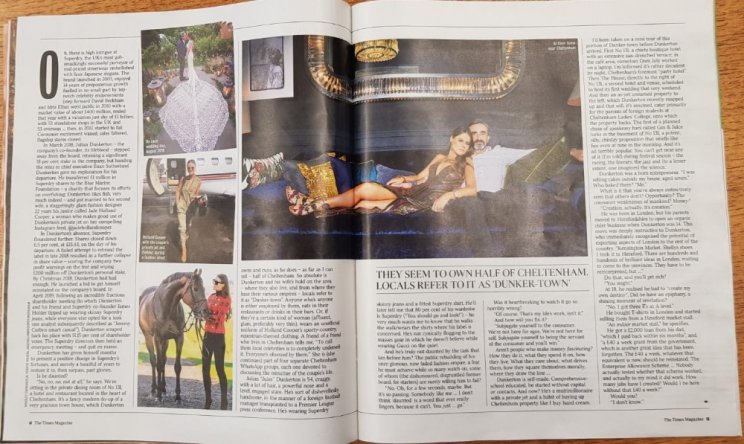 "To call them local celebrities is to completely undersell it. Everyone is obsessed with them," the article adds.

The propensity - in the words of the articles writer to "buy Cheltenham property like I buy hand cream" has led to the odd fraught word in the marriage.

Mrs Superdry said when asked if they ever tell the other they've had a stupid idea: "Yes, I'm going, I cannot open one more hotel in the next year, so don't ....... buy one or I literally will divorce you."

And while tales of the largest pool in the country, where Dunkerton swims 5k each morning and the private jet may lead to the odd envious glance, one thing should be remembered.

Punchline is happy to give Julian Dunkerton the thumbs up and absolute praise because he makes so much investment in Gloucestershire.

From Superdry in Runnings Road - the colour supplement didn't venture down the Kingsditch Trading Estate, funnily enough, to the Lucky Onion empire that stretches out to Minchinhampton.

Yes, some of the millions are spent on the Private Jet and trips to Saint Tropez - they were jetting off to the French Riviera on the day of the interview, but the rest is spent in Gloucestershire.

Punchline has just one request to make of him - if the wife will allow him to, of course as we don't want to be responsible for the divorce.

And that is to cross the Golden Valley and expand the empire into Gloucester. There are plenty of budding no. 131s or the like waiting for you here...