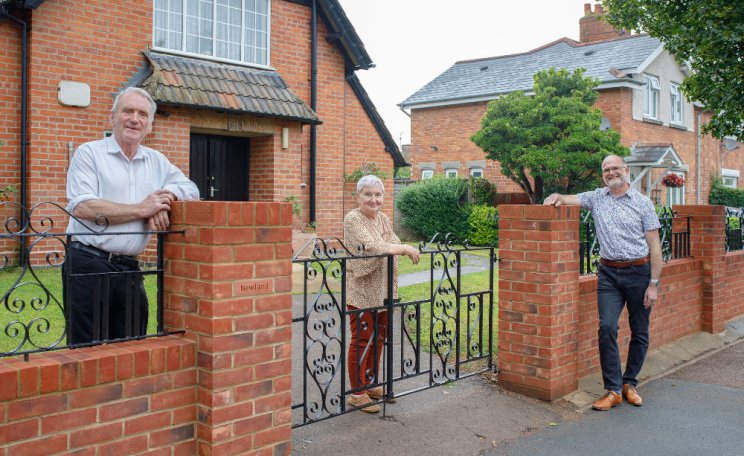 One of the final pieces of the rejuvenation of Hempsted Village Hall, the rebuilding of the front wall, has been completed thanks to Gloucester-based housebuilders Newland Homes.

Over the last few years under the leadership of Hempsted Village Hall Chair Tess Russell, the hall has been completely revamped into a comfortable and welcoming place for the residents of Hempsted. However, the wall that runs at the front of the hall alongside the pavement remained an issue, and a potential hazard to members of the public walking by.

Tess said: "When I took over as Chair six year ago, making the hall safe and welcoming was my ambition. The hall and wall were both built in 1925 and are some of the oldest buildings in the village. However, despite completing work to the hall, the wall continued to be in such a state and it was a real worry to me. We tried fundraising to cover the costs, but when Covid-19 hit I thought there was no now chance we would be able to do the wall.

"What I didn't know was that Village Hall Treasurer, Roger Critchley, had been talking to Newland Homes about it as a surprise for me. I was told at the AGM that Newland Homes had agreed to rebuild the wall for us at no cost, and I was in tears of joy.

"The wall has been rebuilt exactly how it was previously and I am completely overjoyed. They've done such a good job and I'm so proud of the Village Hall now. As a charity, the Village Hall belongs to all of the residents of Hempsted and it is very important to keep these facilities safe and in good order for everyone to be able to enjoy."

Former Hempsted resident and Newland Homes' Corporate Services Director Tim Sergeant officially handed the wall over to the Hempsted Village Hall Committee. Tim said: "I lived in the village for over 40 years firstly as a child of the 60s, then as a father to my own children in the 90s. Much has changed in the village and I have many memories of the Village Hall; the annual Fruit, Flower & Vegetable Show, my smallpox vaccine on a sugar cube, attending youth club, harvest festival dinners and going to barn dances. It has always been very central to the numerous clubs and societies in the village and I am pleased to see how much it has thrived through all the changes.

"When we heard that the wall was in need of rebuilding, but that the committee were struggling to fund it, we immediately agreed to help. Having access to good quality community facilities is so important for villages like Hempsted.

"We've also previously helped out helped out the local playgroup when their building was in disrepair, as well as donating money to help fund the village defibrillator through the Hare Hunt."

The Zero Carbon homes will be amongst the first in the county to achieve this exceptionally high level of sustainable housing and will be far in excess of current regulations for energy efficiency and sustainability. Their build reflects and supports Gloucester City Council's ambition to be carbon neutral by 2050.

The site has been carefully planned so that the homes are positioned in a way which, together with high levels of insulation, makes the best use of solar energy and photovoltaic panels. Green roofs, highly efficient heating systems and ventilation all contribute to these homes achieving a zero carbon standard.