It looks to be a match made in heaven - a historic Gloucestershire pub famed for its connections to racing royalty and a company that is transforming landmark sites across Gloucestershire.

No official announcement has been made by either the Hollow Bottom or the Lucky Onion, but it appears the Guiting Power gastropub is the latest to be acquired by Julian Dunkerton's group.

In July, we reported on the shock news that long-standing landlord Hugh Kelly had decided to call it a day after nearly two decades behind the bar. 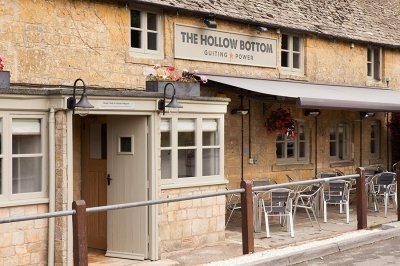 During that time it became renowned as a party venue for the racing set due to its proximity to trainer Nigel Twiston-Davies' stables in Naunton.

It was the scene of celebrations when horses from Twiston-Davies' yard celebrated wins in both the Grand National and Cheltenham Gold Cup.

Such was the link between the pub and the racing world, that news of its closure in July was reported by the Racing Post.

Now, however it appears it is under orders to open again - most likely in time for the first fixture of the season at Prestbury Park.

Adverts have appeared across the internet for bar staff, and they have been posted by the Lucky Onion Group.

One, that appeared on networking site LinkedIn said: "We have an exciting opportunity to join the team of our new opening at The Hollow Bottom, Guiting Power later this summer.

"Raised and rooted in the Cotswolds, The Lucky Onion is where urban sophistication meets local, countryside culture.

"As purveyors of lifestyle experience and events, you're guaranteed to discover something you weren't looking for.

"At the heart of the local community, we are searching for someone who is passionate and driven, who is guest obsessed and focused on delivering a world-class experience regardless of the occasion.

"You will demonstrate creativity and confidence, and be passionate about ensuring our guests receive service thoughtful and individual with clever and unexpected touches.

"Owned and run by Julian Dunkerton, The Lucky Onion is a family of boutique hotels and elegant country pubs in the heart of the Cotswolds.

"Ever expanding we currently consist of five Lucky Onion properties; each one with its own distinct character and personality, but all sharing our genuine passion for great design, high quality food and drink and exceptional service."

The Lucky Onion own 131 Promenade in Cheltenham and are currently in the process of renovating the George Hotel in the town.

The Crown Inn in Minchinhampton is also currently undergoing renovations and is due to open later in the Autumn.