An accountant who abused her trusted position as a bookkeeper in a bid to cheat three small businesses out of almost £150,000 was jailed for two years and four months on Friday (January 20). 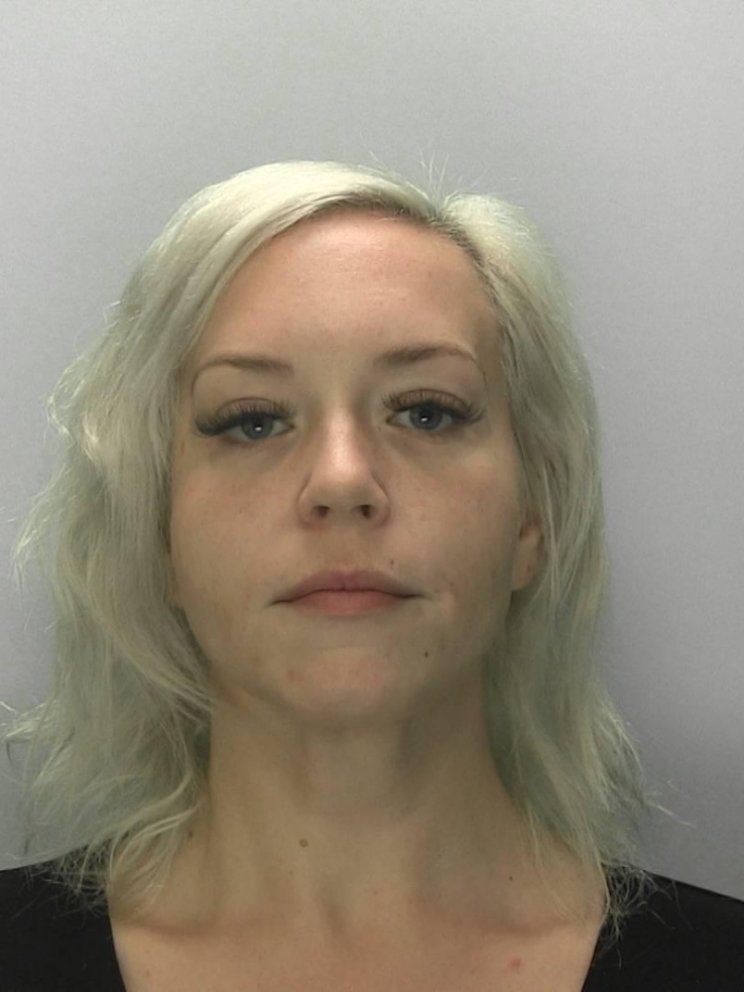 Sophie Workman, 32, of Robin Close, Abbeydale, Gloucester was told by a judge at Gloucester Crown Court that she had committed 'calculated and persistent' fraud over an 18-month period and immediate jail was the only justifiable sentence.

Workman admitted five offences of fraud by abuse of position but claimed that she did it under pressure from an abusive male partner whom she is too scared to name.

Her offences included fraudulently obtaining £89,142.93 from Netball South West - an organisation which is responsible for the management and development of the sport in the region.

The court heard that Workman also tried to defraud £31,563 from the Gilly Salter Consultancy and that the third victim of her dishonesty, PMP Genesis Ltd, had suffered a loss of £26,448.90 and the company had since been dissolved.

Prosecutor Jack Barry said that during 2011, Kevin Parker of PMP Genesis took Workman on to do accountancy work for a couple of hours a month. She was not paid directly but had things purchased for her that included training courses and a printer.

Mr Barry said: "Workman began her employment at the Gilly Salter Consultancy in 2012. After a couple of years, the company recommended that she work with Christine Brooks at Netball South West, where she was appointed to do the accounting.

"In March 2017, Workman handed in her resignation to the consultancy but continued to work her notice over the following month.

"By May 2017, she was working for the consultancy and also for Netball South West on a freelance basis. Over the following 18 months she set up 40 different bank accounts in various names, which were used to deposit the proceeds of over 100 fraudulent transactions.

"Netball South West suffered substantial losses. The first tranche of fraudulent cash totalled £40,900, most of which was withdrawn throughout the Midlands area during May 22 and June 5, 2017.

"It was at this point that Christine Brooks from Netball South West became aware that there were issues with other payments after she had seen emails from various organisations indicating that they had not been paid for their invoices.

"Ms Brooks looked at the bank statement and on checking the organisation's beneficiary list she notice that there were genuine accounts and other accounts that were not genuine.

"She also noticed that a substantial amount of payments were being made into the non-genuine accounts. Further investigation by the police revealed that between October 14, 2016, and May 21, 2017, Workman had paid herself £48,242.93 into these bank accounts.

"This was conducted over 83 transactions into a variety of different bank accounts and these were made to look as if they were legitimate payments.

"While she was working at the Gilly Salter Consultancy, Workman attempted to transfer funds from the organisation's bank accounts into one of her own. On June 19, 2017, at 6.31pm she attempted to move £23,563 from one account. When this failed, she made two further attempts at moving £7,000 and then £1,000.

"However these payments were prevented from proceeding as Lloyds Bank had detected fraudulent activity because Workman was using the consultancy's card reader without authority.

"An inspection of the CCTV revealed that at the relevant time the transactions were being made Workman had been seen entering the building. She was not working that day and had no legitimate reason to be in the office.

"On June 22, 2017, the owner of the consultancy went to make a payment to a management consultant working for the company. She found two accounts in the name of the woman and queried this anomaly with Workman and a payment was made.

"However the next day Workman claimed that the woman was chasing her payment. Workman told the director that this was for a different invoice and was for £93.20. Ms Salter said she would deal with it herself.

"But when Ms Salter looked for the invoice, she noticed a number of other anomalies with duplicate invoice numbers and payment values that did not correctly reflect the invoices.

"Ms Salter also noticed that the payments were being made into an account, which was not her regular account. She also noticed that between June 1 and June 22, 2017, Workman had paid a number of payments totalling £3,274.30 into the new account. A review of the CCTV had been in the office on the occasions that the transactions had been made. That amount was subsequently reimbursed by Lloyds Bank."

The court was told that during the police's investigation into Workman's finances and her numerous bank accounts, the officers realised she had been receiving large regular payments between April 13, 2016 and April 6, 2017 from PMP Genesis Ltd that totalled £26,448.

"Because the payments were above a normal salary a closer examination was conducted with Kevin Parker, the retired director of the company and the fraudulent activity was then exposed."

The court heard that Workman had gained financially from her offending but she did not benefit from the full amount because she had been put under pressure by her partner at the time - a man who she refused to name to the police.

The court was told that the police found a note among Workman's belongings that was headed 'I want list' and stated: "I want to make lots of money quickly. I want to be clear of my debts. I want to buy my own house." Mr Barry said: "It seems pretty clear what the intentions are."

In a victim statement Gilly Salter said: "Having worked for me for a few years, I had become very fond of Workman while she was bringing up her children. I treated them as I did my own children. I showed both empathy and understanding when they needed time out, or when they had a personal crisis.

"I was generous with birthday treats and social nights out with the team. I gave bonuses when I could. I never once thought that Workman would take advantage of me. I was devastated when I learnt that she had maintained a façade over the years of being a trustworthy employee and friend while she was stealing and manipulating and potentially ruining the company."

Ms Salter said Workman's offending has had a lasting effect on her and the business and she feels violated by what happened.

Karen Jones, the chairman of Netball South West said: "The theft of over £89,000 has massively affected the organisation financially, emotionally and psychologically. Initially we were shocked that someone we had trusted, someone we had supported with tokens of gratitude and invitations to regional celebrations, could do this to us.

"We always treated Workman with respect. We paid her a good wage. She had been a trusted colleague."

The court was told that Workman has a previous conviction for dishonesty in 2013. She wilfully made a false declaration concerning the registration of a still birth when she hadn't given birth. Workman received a conditional discharge for this offence.

Defending Workman, Gudrun Young KC said "Her first offence in 2013 occurred at a time when she was in a relationship with a man who was abusive towards her and persuaded her to register a still birth, when no such event had taken place.

"Workman is a vulnerable damaged woman who seems to be attracted to abusive men. It was this situation that led her to commit these fraudulent offences. She is petrified about the impact it will have on her children if she is sent to prison."

"There is clearly another side to Workman. She has demonstrated that she is a devoted mother and has worked hard despite the relationships she has had along the way.

"She feels she is a victim as well as being perpetrator. She would not have got involved in the fraudulent offences had she not got involved with this man, whose identity has never been disclosed for fear of reprisals.

"Workman had been employed by these companies for a significant period of time without a single penny going missing before she met this man.

"She emphases that she didn't initiate the fraud. She believes that her partner targeted her because of her occupation because she had access to funds.

"The saga effectively came to an end when she told him that she had enough and felt that matters were getting out of hand. She received a black eye from him. This also coincided with her fraudulent activity being discovered by her employers.

"Workman was terrified by her partner, but she loved him at the same time. She was clearly under the influence of somebody who was criminally minded.

"All she wanted was a better life. She didn't profit from her offending. She wasn't making hay with the money, and she certainly wasn't living a luxury lifestyle. She didn't buy designer clothing. In fact, her lifestyle was rather modest.

"She is remorseful and is sorry for the hurt she has caused to her victims. She was, and is, petrified to give the police the man's name.

"She hasn't offended since that time. She has well and truly learnt her lesson."

Fraud by abuse of position between May 21 and June 6, 2017 while occupying the position of book-keeper, causing Netball South West to suffer a loss of £40,900.

*On June 19, 2017, while employed as a book-keeper with Gilly Salter Consultancy, dishonestly obtained £31,563.00 as a personal financial gain;

*Between May 31 and June 23, 2017, whilst occupying a role as book-keeper with Gilly Salter Consultancy, dishonestly abused her position in making a personal gain of £3,274.30; and

Passing sentence Judge Lawrie told her "It is a calculated and persistent fraud knowingly committed in conjunction with others. "These offences are so serious that only a sentence of immediate imprisonment is justified.

"The circumstances are neatly summed up, and powerfully hinted at, in a note found at your home. The 'I want' note shows your emotional vulnerability, but also your aspiration and ambition in respect of money.

"You exercised poor judgment when you formed a close emotional relationship with a unnamed male. Whatever might have started the offending you accept you gave every collaborative support to the fraudulent acquisition of money from your victims.

"You had employment, good and reasonably paid work. There were no obvious and significant financial pressures on you to acquire greater amounts of money. You facilitated this fraud out of greed and the desire expressed in your note.

"You allowed your flawed relationship and subsequent actions to take priority over your own family's needs."

Workman will face a confiscation hearing under the Proceeds of Crime Act at a later date.