Plans are well underway in Gloucester to celebrate the Queen's Jubilee year with almost 4,500 trees joining the Queen's canopy and the ancient tradition of sending a congratulatory pie to the palace set to return. 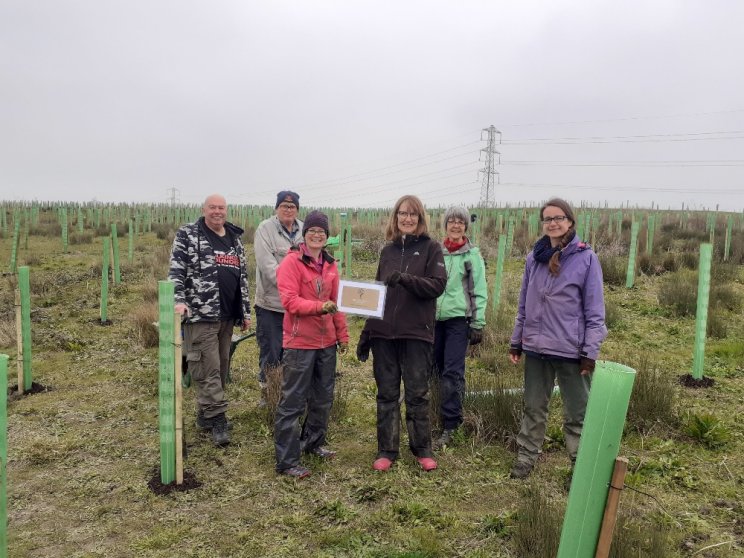 A new woodland at Horsbere Brook at the base of Chosen Hill boasting 3,687 trees dedicated to Her Majesty's celebratory year has now been planted by the Friends of Horsbere Brook, local volunteers and officers from Gloucester City Council.

The trees will help increase biodiversity and aid flood alleviation and are part of the Queen's Green Canopy planting initiative set up for the Platinum Jubilee, that encourages everyone from individuals to villages, cities and schools to plant trees during the Jubilee year.

Funded by the European Regional Development Fund and the Environment Agency along with donations by local volunteers, the trees are a mixture of native species, chosen for both being attractive to wildlife and being able to cope with local conditions.

They join another 750 donated by The Woodland Trust planted nearby in 2021, in what is known as Cliffs Wood dedicated to the memory of Clifford Griffith, a key member of the Friends of Horsbere. The wood will also be dedicated to the Queen's Green Canopy project.

Also marking the celebration of the reign of Queen Elizabeth II, will be the return of the tradition of Gloucester sending a pie to the palace, which dates back to the Middle Ages.

The council has teamed up with chefs at the city's Farmer's Boy pub to come up with a dish fit for a queen based on the traditional Gloucester Pie, usually made with pork or lamb.

It will update the tradition of sending a Lamprey Pie as lampreys are an endangered species.

The pie will be presented to Edward Gillespie OBE, Lord Lieutenant of Gloucestershire by the Mayor of Gloucester at Llanthony Priory on May 30.

And Gloucester will join other towns and cities around the UK by lighting a beacon on June 2.

It will be lit on Robinswood Hill and the event will be accompanied by a piper and bugler from the cadets with an official proclamation being given by town crier, Alan Myatt at Gloucester Cross at 2pm.

While over the Jubilee weekend, June 3-5, the city will be abuzz with activity as Gloucester Docks plays host to the Tall Ships Festival held alongside a Sea Shanty Festival that will see performers taking to the streets, which will be decorated for the occasion.

Councillor Richard Cook, leader of Gloucester City Council, said: "This is a very special year both for our queen and for the whole country and we're delighted to be celebrating it, not only putting on fantastic events for people but also by showing our commitment to future generations through the Queen's Green Canopy project."