Less than two months after they were confirmed as the new owners of a huge out-of-town retail park, Gloucester City Council have announced they've bought a city centre shopping complex.

The council have confirmed that as "part of its long-term commitment to regenerating the city centre" they have purchased Eastgate Shopping Centre.

The long-term lease of the centre has been acquired, while the council already owns the freehold and has leases on the rooftop car park and indoor market hall. 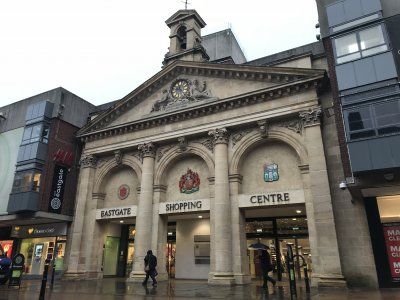 The purchase is the latest investment in the city centre alongside completed projects such as the new Transport Hub and the proposed plans for the King's Quarter redevelopment.

In a statement, the council said they planned to work "in partnership with business, community and public sector partners to refocus the city centre with less reliance on traditional retail."

The statement added: "More people living and working in the city centre and developing heritage and leisure experiences have been identified as ways of counteracting reduced demand for retail space."

"The Council's vision is that by 2025, the city centre will be transformed from one based on a traditional retail offer to one with a variety of experiences throughout the day and night for residents, workers and visitors.

"By purchasing the Eastgate Shopping Centre, the City Council will be able to proactively manage the retail offer in large parts of the city centre and develop plans to rebalance the mix of uses.

"As well as giving the City Council greater control over the future direction of the city centre, the purchase also provides a sustainable and long-term income for the council."

In 2019, the council secured £1.9million of investment as part of the Government's High Street Heritage Action Zone initiative to help regenerate Westgate Street.

The Cathedral Quarter initiative will commence in April 2020 and will utilise the city's heritage and diverse culture to transform the centre.

The bid put a focus on making it the place where the city comes together to access services and participate in civic and community activities and events.

Paul James, cabinet member for regeneration and economy said: "This is another exciting acquisition for the council that demonstrates our commitment to the city centre and gives us a greater ability to shape its future.

"Town and city centres are evolving but still have a vitally important role to play and it is right that local councils show leadership by investing in them and helping to ensure they can survive and thrive into the future."

"The Council already has a number of financial interests in the Eastgate, and it makes good long-term commercial sense for us to control it in its entirety.

"It also enables us to resolve the future of the indoor market and give traders the certainty they have been seeking."

Prior to the Council purchase, The 178,000 square feet Eastgate Shopping Centre was part of the so-called Tiger Portfolio of five city or town centre shopping locations.

That portfolio was valued at around £265million when it was bought by the Lone Star private equity fund in 2014.

No financial details have been given of the amount paid to secure Eastgate Shopping Centre, but the news come hot on the heels of the £54million purchase of St Oswalds Retail Park in November.