A 69-year-old cancer victim who armed herself with a broom to challenge a burglar she caught red-handed in her home was amazed when he calmly offered to make her a cup of tea.

Teresa Rae has been so badly affected by the brazen burglary of her flat in Gloucester that she has been forced to sell it as she no longer feels safe in her home of the last 40 years.

Gloucester Crown Court was told on Friday that Matthew Portlock, 41, of Taylor House, Matson Lane, Gloucester broke into her home in St Mary's Square, near Gloucester Cathedral, late on the night of June 29 this year.

Prosecutor Julian Kesner said: "The home owner, Teresa Rae, was in bed at 11.30pm when she heard somebody downstairs and she went to investigate. 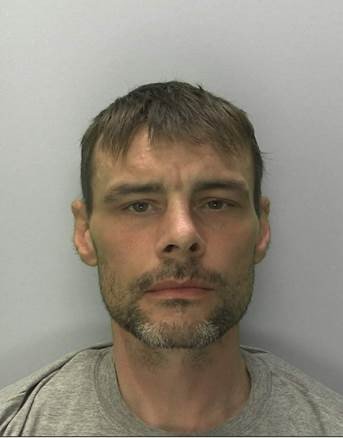 "She armed herself with a long-handled garden brush and went into the kitchen where she encountered the intruder rummaging around in the dark.

"She approached him with trepidation and Portlock said to her, 'What are you going to do with that?' He then offered to make her a cup of tea.

"She refused and demanded that he leave her property. He raised his voice and started shouting at her. As he left, he stole her washbag, which contained some £200 worth of cosmetics.

"Hearing the shouting a concerned neighbour phoned the police and a man matching the description of the burglar, riding a bicycle, was arrested by patrolling officers in Eastgate Street a short while later.

"When he was arrested he had the woman's washbag on him and told police that he had found it. He was also in possession of a quantity of cannabis."

Portlock pleaded guilty to a dwelling burglary on June 29, 2019 at St Mary's Square and possessing cannabis on June 30. He was jailed for four years and nine months.

In a victim statement Ms Rae said that the incident had made her feel vulnerable all of the time.

She added: "The burglar's actions have petrified and terrified me. I thought he was going to kill me. I didn't know how it was going to end.

"I haven't been able to cope or relax since the incident. I don't feel safe in my own home, which I have lived in for 40 years."

Judge Ian Lawrie QC commented: "This is a 69-year-old woman who is effectively being forced out of her home by the actions of Portlock, who knew exactly what he was doing when he entered the property."

The court was told that Portlock had 42 previous convictions and this was the sixth burglary of a domestic dwelling as an adult.

Joe Maloney, defending, said: "Portlock was in a very disturbed state when I first met him in September. He is slowly addressing his drug problem.

"He admits he has a long history of offending and knows he is going to receive a substantial sentence, having already been a three strikes burglar on two previous occasions."

The judge told Portlock: "What concerns me about this offence, is that you intruded into the sanctity of a woman's home.

"I saw your facial response when her statement was read out and your expression revealed that you didn't agree with her feeling frightened.

"She is elderly. She was in her own home. You are an intruder. The impact of your intrusion into her personal space is echoed in her personal statement.

"You burgled the home of a woman suffering from cancer. It terrified her. She cried when she saw you as she didn't know what was happening.

"She had the courage to confront you and hit you with the garden implement she was holding. She thought you were going to kill her.

"The woman was terrified as she didn't know how the incident was going to end.

"We now have confirmation that the consequences of your intrusion into her home of four decades that she feels she needs to move - a time when it is late in her life whilst suffering from health issues.

"You have no mitigation except for pleading guilty and avoiding a trial.

"The court has allowed you numerous opportunities to sort out your drugs problem. But you have failed in all respects.

"You have an appalling record of offending and this is your third three strikes sentence.

"What you history shows that despite efforts of various relevant bodies, any attempt at rehabilitation in the community has failed."

As the judge sentenced Portlock to four years and nine months in prison he added: "The system has given up on you as you have given up on it."

He ordered Portlock to pay a victim surcharge of £181 and ordered for the forfeiture and destruction of the cannabis found in his possession.

Detective Sergeant Austin Parry of Gloucestershire police said: "The quick reporting of the incident allowed officers who were on patrol in the area to locate Portlock nearby.

"The result of Portlock's activities greatly impacted on the victim and made her feel unsafe in her own home.

"Portlock was on release from prison on licence at the time of the burglary and I am pleased that we were able to get this outcome for the victim.

"We are currently running an anti-burglary campaign and more information on the campaign and ways to protect your home can be found by visiting: https://www.gloucestershire.police.uk/campaigns/burglary/   "