A Bristol business is celebrating after one of its trainees was named national Flooring Apprentice Of The Year. 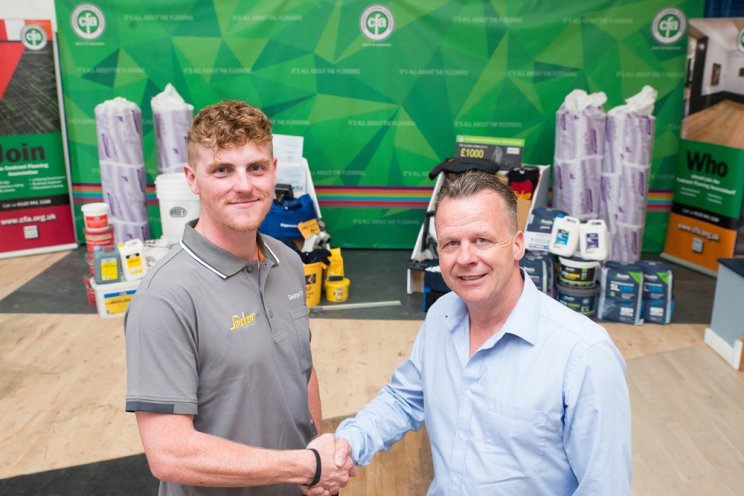 George Carter, from Gloucester, started his career as a floor layer two years ago with Rudge Brothers & James Ltd (RBJ), one of the UK's premier floor coverings and hygienic wall cladding contractors based in St. Philip's, Bristol and started in 1972.

The Contract Flooring Association (CFA) said this year's competition attracted "fantastic entries from all over the UK", but that "George's outstanding entry set him apart from his competition."

Mr Carter said: "There are no words to describe how honoured I feel to have been chosen for this award. The competition is tough, and I can now carry this title with pride, for the rest of my career as a floor layer.

"I have to say a big thank you to my employer Rudge Brothers and James for giving me the opportunity and taking me on as an apprentice, sending me to FloorSkills, a training college which teaches to the highest standards.

"I also want to personally thank Andy and Shaun Kessler, floor layers at RBJ, who have guided me through my journey. This award is life changing for me and my career as a floor layer, which I am nothing but passionate about."

Jim Heal, managing director of RBJ, said: "I cannot be prouder of George. It has been our pleasure to have him as one of our apprentices. His dedication and willingness to listen and learn has led to him winning this title. He has put a huge amount of time and effort into his learning, both at FloorSkills and with his mentors, Andy and Shaun Kessler, on site.

"In less than two years, he has progressed from starting as a trainee fitter to being crowned apprentice of the year, which is amazing."

FloorSkills is an the training centre which George attends for his off-the-job training as part of his apprenticeship.

Tutor Rob Harper said: "George has given everything in each and every training session he is involved in; he learns fast, not just from practical training but the theory that goes with it and has strived to deliver the very best results at all times.

"He has demonstrated a fantastic desire to learn and develop himself in all areas of his work, but also has the ability with his hands to match his desire and the future is very bright for him, showing himself to be skilled in all areas of his apprenticeship.

"George is an asset to the industry, and this industry will be in a great position the more people like him we can get involved."

In addition to earning the prestigious title, George will receive prizes worth more than £4,000, including a specialist flooring tool kit, featuring workwear, protective equipment, hand and power tools and more; £1,000 in prize money plus shopping vouchers and two free training courses to expand his knowledge, skills and expertise even further.

He was presented with his award at the Flooring Industry Training Centre in Loughborough.