From food to fire - local men keeping the Cotswolds safe 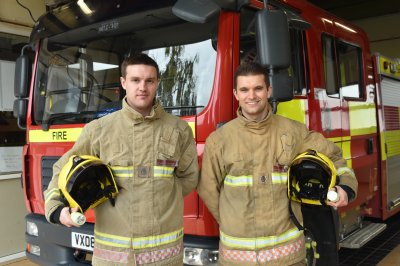 It's tough enough to do one job for a living, but at a Chipping Campden based food research company, one member of staff has taken things a step further.

Richard is a marketing executive at Campden BRI and joined GFRS after noticing a sign on the way to work. He has completed his basic training and was officially accepted into the service during his passing out parade.

He said "I've always wanted to give something back to the community and this role gave me the perfect opportunity. My two jobs are very different and complement one another very well. It definitely keeps me on my toes!"

Craig Ballard, who also works for Campden BRI as a packaging technologist, joined the service three years ago and is now a fully competent firefighter.

He said "You always feel a sense of excitement when you get a call and then drop what you're doing and rush to the station. No two jobs are ever the same".

Martin Hall, the director responsible for health and safety at the company, said "We're delighted to have two members of staff involved in looking out for the safety of the local community. I'm sure we will also benefit from their added safety awareness!"

Neil Anderson, watch manager at Chipping Campden community fire station, said "We're proud to have Richard and Craig as part of the team as we build on our resources to provide round-the-clock support."

Coronavirus LIVE Updates: The latest news from across Gloucestershire on Thursday, July 2

Local television and radio presenters are among those affected after the BBC announced plans to make 450 staff working on its regional programmes in England redundant.

The chairman of Airbus UK has said further job losses cannot be ruled out after the announcement of 1,700 redundancies.

BPE Solicitors has recruited Nick Rowe as head of its employment team.