A Cotswolds hotel general manager has told of the terrifying 'horror film' moment when three masked men smashed a window and jumped through to attack and rob him.

Adrian Cuddy was just finishing work at the historic Frogmill Inn at Shipton Oliffe at 1am on November 30 last year when he saw a face staring through the window at him.

"Moments later three men wearing balaclavas smashed through the glass window and attacked Mr Cuddy, forcing him to the ground face down and telling him they had knives," said prosecutor Julian Kesner at Gloucester crown court.

"Mr Cuddy felt a knife being applied to his back making him fear for his life. The three men took Mr Cuddy's iPhone and demanded money from the hotel safe.

"They forced Mr Cuddy to take them to the room where the safe is located and was told that if he shouted they would stab him.

Mr Kesner told the court that blood on the window and Mr Cuddy's jacket was forensically examined by experts and was matched with Leon Harris, 36, of Buscombe Gardens, Gloucester.

"Harris was arrested in October this year and he didn't have any explanation as to how his blood came to be on the window and Mr Cuddy's jacket," said Mr Kesner. 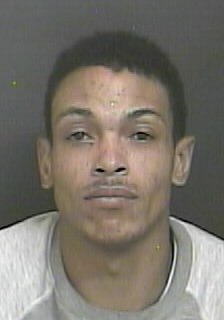 Harris pleaded guilty today to robbing Mr Cuddy of £1,824 and his phone.

The court was told that incident has had a devastating effect on Mr Cuddy.

In a victim statement he said: "I made the hotel my own. I chose and appointed the team which I built up from scratch.

"On the night itself, it was nothing short of a horror film. When I shut my eyes, I vividly see the face in the window looking back at me. I am haunted by this image.

"I have tried to go back to work, but I cannot face going back into the hotel because of what happened.

"I have to face up to the fact that I can no longer be the hotel's general manager and therefore I'm reluctantly forced to leave my wonderful team behind."

Judge Recorder Paul Dunkels QC said: "It is clear that Mr Cuddy is still suffering from the effects of seeing the intruder through the window and having his life threatened by three men."

Kannan Siva, defending, said: "I concede that even though Mr Cuddy suffered no physical injury, he has suffered psychologically and the incident has left its mark on him.

"Harris has a long list of convictions, which had been reducing in severity over time.

"I would like to point out the robbery offences were committed a year ago, but he was not arrested until October this year. However, he does realise he will be receiving a substantial prison sentence."

Judge Dunkels said: "You were one of three men who planned a raid on a commercial property in a remote part of the Cotswolds. You were wearing a balaclava as you anticipated that you would be seen at the hotel.

"You held Mr Cuddy face down on the floor and he had every reason to fear for his life, believing he would be stabbed.

"It was a terrifying experience for him, especially as you forced Mr Cuddy to open the safe.

"He felt he could no longer work at the hotel and has had to have medication and counselling to enable him to sleep at night.

The judge jailed Harris for seven years and told him to pay £170 victim surcharge.

The Frogmill was until two years ago by world-famous chef Marco Pierre White, who then sold it to the Brakspear group.