Lives being turned around by upcycling charity

Nadine Jones tells a moving story about how her husband was taken unaware by a member of staff at a Christmas party.

It is a tale which speaks volumes for the charity they run - Forest Upcycling Project - which collects, sells and even gives away second-hand furniture, creating employment and training opportunities in the process.

Once among the long-term unemployed, the staff member in question had some time before inspired Matthew Jones, 48, and his wife to open up a gardening service arm to their charity - something which reflected his own interests and skills. 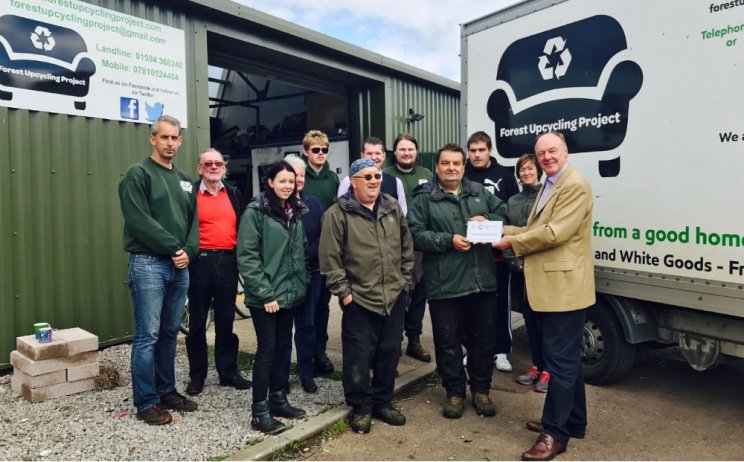 That service became popular enough to attract regular customers, support itself and now even have a small staff team of its own.

"He came up to Matthew and said 'I have wanted to say this to you for a long time. You have changed my life'," said Mrs Jones, 40, now deputy manager at the project.

She has a way of telling the story that brings lump to your throat.

Forest Upcycling started innocently enough, with a career-teacher and family man, Mr Jones, who wanted a change - and who wanted to try to make the world a better place in his own small way.

"He had a reasonably well-paid job he loved, but he had become quite senior and felt he was having less and less of an impact," said Mrs Jones, who continued working as a teacher herself to support her husband (and four children) as he set forth on a new venture.

What he thought might work and help just a few people became a divining rod, which led him towards an need among many, many people - old and young - for the most basic of provisions like beds, fridges, cookers, tables and chairs.

"There was a similar charity set up near where we had lived near Newbury and he thought that might work here," recalled Mrs Jones.

It did - and grew so fast that bringing the funds in to keep up became a challenge. Eventually Nadine became part of the charity as well.

"We have had a few grants from the Police and Crime Commissioner's Fund and they have all made a massive difference.

"We put in a bid last time to help with safety equipment. Any of our funds we can we direct back into employment costs. The aim is to create proper opportunity for people who might otherwise be struggling.

"We now have 18 employees across two sites. The Commissioner's Fund has recently given us £6,000 for uniforms - which frees-up the equivalent amount of money we can then use to provide employment opportunities," said Mrs Jones.

"Our first employee was a 19-year-old who was supposed to have been home schooled, but he did not really have an literacy skills at all. We helped him develop those skills so he was able to apply for a job."

But the charity will do its best to help anyone, whether they have training requirements, need to build their confidence to help them re-enter the jobs market, have special needs, or wants to volunteer.

"We go and look at some people's homes and it really opens your eyes to the level of poverty out there and the number of people who really need help.

"On Christmas Eve one year we had a call from social services asking if we had anything we could give a young couple with a baby they had just found a flat for.

"It meant we were going to have to give up our Christmas Eve with our families to deliver the items - but they really had nothing. So you help, don't you."