A businesswoman from the Forest of Dean has stormed to a third place in the Triathlon World Championships in Switzerland.

During working hours business owner Victoria Baker runs T3 Designs in Coleford, as well as being a full-time mum to six-year-old son, but she somehow also finds time to train - to international level.

This year she qualified to race for Team GB in the world championships, and it was sponsorship from two other Coleford businesses which made competing possible. 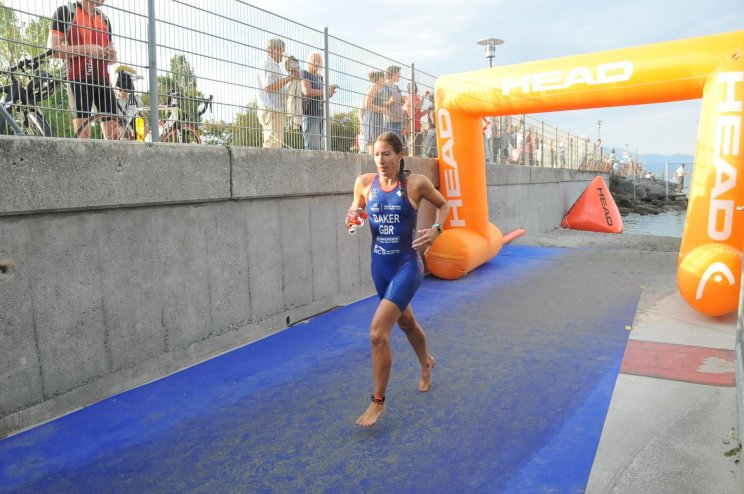 "I work on the same business park as them and actually do their clothing too. I was Rich (Richard Gwilliam) at RCS Roof Cleaning Systems that approached me and said he would sponsor me," said Ms Baker, whose business is on the Tufthorn Industrial Estate.

"And then Maddock Plant Hire and Sales Ltd also said they would support me too - which was amazing. They made it possible."

All she had to do then was complete get to the ITU World Triathlon Grand Final in Lausanne and complete the 1.5km swim, 40km bike ride and 10km run as quickly as physically possible.

It is something she did in two hours, 22 minutes and 49 seconds, making the 36-year-old third in her age group.

She fits training in around her business, often starting her day at 5.30am with a ride or an hour on her watt bike, rounding the day off in the evening with a run.

She also trains at Rockets Health and Fitness club in Coleford and one evening a week sees her join up with Monmouth Triathlon Club, which she credits with helping her achieve such impressive results.

That includes other significant results on an international level.

Ms Baker, started her T3 designs 11 years after moving to Gloucestershire from Hereford where she had been working for an embroidery business after gaining a degree in fashion and textiles.

Not enjoying the commute back to Hereford, but loving the Forest of Dean too much to move, she surprised herself by making the decision to start her own company, a printing and embroidery business.

The sport was just something she did for fun.

"I had always enjoyed swimming and riding my bike for fun, but then decided to have a go at a local triathlon in Lydney," she said.

It was European, world and Paralympic triathlon champion her Any Lewis, MBE, a native of the Forest of Dean, who suggested she should try to qualify for the GB squad.

Laughing off the suggestion initially her persisted and encouraged her to enter a qualifying event in Cambridge. He was right, and before she knew it she was finishing second in Lisbon in the European Championships in 2016 and then back for more in 2017 in Austria, where she not only won her age group but was first female over the line.

Is there more to come? The next World Championships in is Canada. Watch this space.