Pupils from Five Acres High School have been getting behind the Plastic Free Coleford campaign, which was launched over the weekend at this year's Coleford Music Festival.

The pilot project, which is a joint initiative between Coleford Town Council and Forest of Dean District Council, is investigating how the use of single-use plastics can be reduced in the town. Typically single-use products include plastic drinks bottles, straws, cutlery and takeaway food containers, including Styrofoam trays, but these are just the tip of the plastic problem. 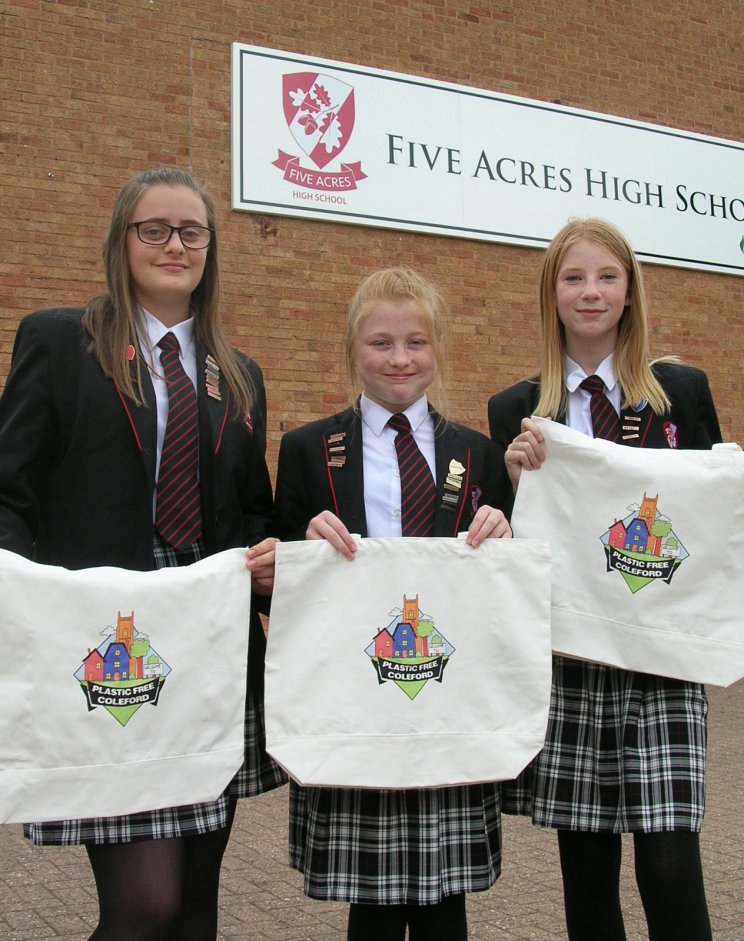 Students at Five Acres were invited to design a logo for the campaign, with the winning motif being created by Savannah James. Designs by pupils Ellena Brackston and Amy Cooke were also highly commended.

Bekki Smith, teacher at Five Acres High, who has been working with the students on the project, said: "The school is very proud to be part of the Plastic Free Coleford campaign. The Student Voice team has seen recent news reports about the effect that plastic can have on the environment and on marine life and Five Acres High School students wanted to be proactive in helping find solutions to those single-use plastics used in our daily lives.

"The school restaurant has already taken up the plastic-free challenge and made the move to offering recycled wooden cutlery - as opposed to plastic - and is looking at options to reuse and reduce the number of water bottles sold."

Coleford town mayor, Cllr Nick Penny, said: "It has been great to see the level of interest by the Student Voice students on this important environmental issue. Along with that, some positive discussions were had at the Plastic Free Coleford stand at the music festival. One aim of the project is to try and reduce the amount of single-use plastics being used at local events and we were delighted that for the first time visitors to the festival were able to purchase a reusable plastic drinks cup to minimise the amount of throwaway plastic glasses being used."

Cllor Sid Phelps, cabinet member for the environment at Forest of Dean District Council, said: "The government's ban on some 'use once' plastic items - such as plastic-stemmed cotton buds, straws and drinks stirrers - is due to come into force next year. However, with concerns about the environment escalating, there are steps which we can all take to make changes right now, simply by making more conscious and informed choices about what we buy. In addition to working with our local schools, we will be speaking to traders and the wider Coleford community about how best we can reduce the amount of single-use plastics currently being used in the town."

If successful, it is hoped that the project can act as a template for other local towns and villages looking to make the change.