The first modular housing development in the Forest of Dean is nearing completion at Mannings Farm, Drybrook, with the first residents expected to move in in early December. 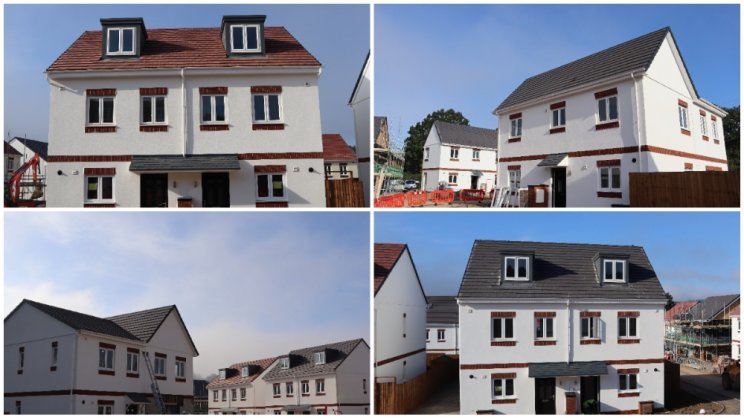 Owned and managed by The Guinness Partnership, the development was supported by a £45,000 contribution from the Forest of Dean District Council and Strategic Partnership funding from Homes England.

It is also the first development in the new, nationwide partnership between Guinness and ilke Homes.

Fifty-one factory-built homes were manufactured by modular house builder ilke Homes, at the company's 250,000 square foot factory in North Yorkshire, before being transported to the site in Drybrook. The first houses arrived in April and the development aims to be completed in March. The modular homes will be joined by six traditionally built flats.

Mannings Farm, located on the edge of Drybrook village and adjacent to Drybrook's Rugby Football Ground, is said to offer a range of options for new residents from one-bedroom apartments up to four-bedroom houses, and consists of 65 per cent for affordable rent and 35 per cent shared ownership tenures.

Cabinet member for Housing, Cllr Claire Vaughan, said:"It has been great for the District Council to support this innovative housing project, which is the first of its kind in the Forest of Dean, and will be providing more than 50 new homes, including 37 new affordable rental properties in a great location for families."

The modular homes have achieved a 'B' Energy Performance Certificate (EPC) rating, the second most efficient rating available, with ilke Homes' stating that it takes around 20 per cent less energy to heat its modular homes than new traditionally constructed properties.

Cabinet member for Climate Emergency, Cllr Chris McFarling, added: "Buildings currently account for around 40 per cent of carbons emissions in the UK and 60 per cent of all waste. We are hoping that these homes stand as a testament to our commitment to be carbon neutral as a district by 2030. Not only have they been constructed using more energy and economically efficient processes, but thanks to their B EPC rating, it will also mean that less energy will be needed to heat the homes through the winter."

Jon Milburn, group development director at The Guinness Partnership, said: "We are delighted that the development at Mannings Farm is almost complete. Working with ilke Homes means that we are able to deliver much needed, high-quality affordable housing more quickly to the Forest of Dean."

Applications are open for the homes on Mannings Farm, with nine of the shared ownership properties already reserved, and allocation for the affordable housing taking place over the next couple of months.