Fight for mental health in aid of air ambulance

A 51-year-old man from Dursley will be walking into the ring for his first ever white collar boxing match in April, in aid of Great Western Air Ambulance Charity.

With no previous experience in the ring, this is a huge challenge for Mike Hayward to be taking on, after just eight weeks of intense training.

Mike said: "I've been ill for about nine years with clinical depression and bulimia, and about six months ago I started to feel like it was coming to an end. This was in no small part due to friends who came into my life at that time, offered support that wasn`t there before, made me feel confident, worthwhile, worthy and have changed my life for the better." 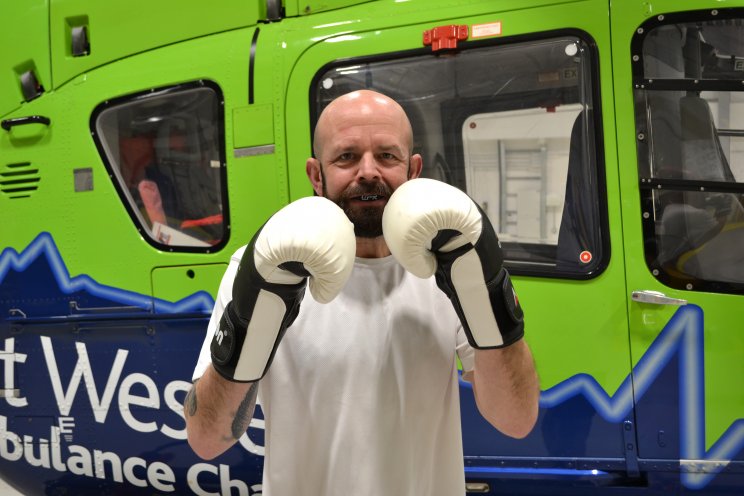 Mike has suffered a long-lasting battle with his own mental health and wellbeing and, like many people who suffer from poor mental health, has struggled to carry on with his day-to-day life.

A few months ago, he noticed a difference in his wellbeing, and decided to look for a new challenge to focus on. He decided to throw himself into something different in support of his local air ambulance and signed up to Ultra White Collar Boxing.

Mike said: "I have a real confidence issue since I've been ill, I don't like to go outside of my comfort zone. But once you get over the hard bit of getting out the door, it makes a huge difference."

Mike will be taking part in three rounds of two minute matches on the evening of 5th April, in front of a crowd of 500 people.

"What's really nice is that everyone has been really supportive and interested. People I see walking down the street will ask know the boxing is going, so that's really nice. Family and friends have been absolutely fantastic, the gym I go to have booked a table of 10 to come and watch, as has my local pub."

As well as being an important step on his road to recovery, and to raise awareness of mental health issues amongst men, Mike is also hoping to raise £2,000 for his local air ambulance, GWAAC. The charity holds a special place in his family after the Critical Care Team attended to his son, Jamie, around 10 years ago when he was injured playing rugby.

The charity provides a critical care service to 2.1 million people across Gloucestershire, South Gloucestershire, Bristol, Bath and North East Somerset and North Somerset, attending an average of five life-threatening incidents a day. Each mission the Critical Care Team carries out costs around £2,000, with the team bringing the skills and interventions of a hospital straight to the scene of a patient where they need it the most.

To follow Mike's journey and help him raise awareness for two great causes, go to his JustGiving page at https://www.justgiving.com/fundraising/andrew-markham7 .