The generosity of the football family has helped Gloucester's Nathan Mattick fund his new £9,000 electric wheelchair.

The 23-year-old from Hucclecote took to social media last month in a bid to replace the ailing power chair that he needs to lead his independent life.

A volunteer at Cheltenham Town Football Club and with the club's Supporters Trust, Nathan is also the country's first qualified referee to use a wheelchair. 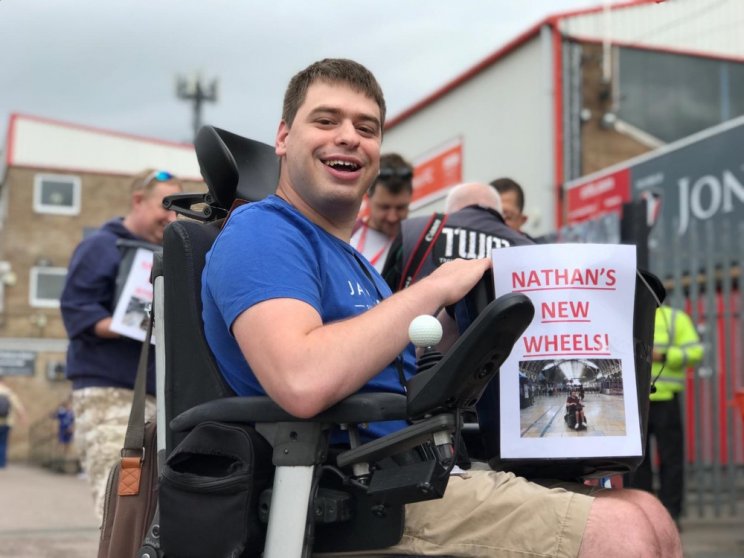 And it was thanks to his face being known in the football community that his chair came to be funded.

His target of £8,900 was hit on Tuesday thanks to a donation of more than £2,000 from the Gloucestershire Football Association.

But it was the efforts of regular Robins fans - and those of former Premier League champions Leicester City - that really helped make a difference.

Nathan said: "I am so thankful to everyone who donated money, either through our online campaign on Crowdfunder, or by donating loose change.

"We held a bucket collection at the Cheltenham v Leicester City game recently and made an incredible £1,200 from fans on the day.

"I can't thank the Robins fans and Leicester supporters enough for what they did. I was overwhelmed by the way the football community dug deep that day to help my cause."

Nathan, who suffers from cerebral palsy relies on his chair to get him from A to B, which he often does on his own.

Fiercely independent, he knew that his old chair could 'die' at any time and leave him unable to get out of his home.

He has now ordered the Quickie Q 700 Sedeo Pro chair and can't wait to take delivery of his new wheels, that has a top speed of 8 miles per hour.

"Being without a powered chair for any length of time would have a massive impact on me, taking away all of my independence," he said.

"All of my work means I need to get around independently and I have only been able to do this with my powered chair.

"So, thank you, from the bottom of my heart, to everyone who donated.

"From the Gloucestershire FA who helped me get across the line with their £2,000 donation to the fans who put a pound in the bucket, you all made a difference."