The extension of a suspension on eviction for retailers unable to pay their rent has been welcomed by trade bodies. 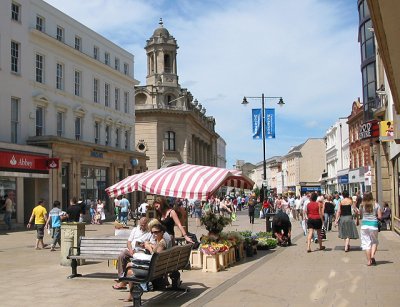 But the Government has been urged to go further to support high street businesses as they return to trading after three months of no or reduced income.

Ahead of Wednesday's quarter day - when retail and hospitality firms are due to pay three months' rent - the temporary ban on evictions has been extended from June 30 to September 30.

And the Government has published a code of practice for landlords and tenants involved in negotiations as they both face financial pressures created by the coronavirus pandemic.

Around half of the rent due to in March was aid with landlords expecting that figure to drop in the latest quarter - although the ban on eviction does not cover anyone whose arrears are 189 days or more.

He said: "Some landlords will need to understand that they need to work with their retail tenants for the long-term good of both parties.

"Extending the ban on evictions will give retailers the breathing space they need for now."

He continued: "Long term, we need to have serious conversations about the way rental agreements are structured.

"I'd like to see the Government working with organisations like BIDs nationally on replacing the current deals with turnover rentals, where the landlords benefit when businesses are doing well but aren't able to make unrealistic demands at quieter times."

And he repeated the call from the #RaiseTheBar campaign for the Government to help those businesses whose rateable value was too high for them to qualify for emergency support during the pandemic.

"We are still looking for a sign that the Government really understands the impact that its decision not to extend the support for retail and hospitality businesses will have.

"Raising the bar so that businesses with a rateable value of more than £51,000 can benefit from the grants of up to £25,000 could be the difference between some opening and staying permanently closed.

He told the Retail Gazette: "In a recent survey, 80 per cent of respondents had tried to negotiate with landlords - and 60 per cent of landlords had refused.

"It was clear that retailers needed more protection and this moratorium goes some way to achieving that.

"We hope now that landlords will work with tenants to find a mutually acceptable solution."

But The British Retail Consortium warned the code did not provide a solution for those who could not meet rent demands.

Chief executive Helen Dickinson said: "Without further action, both retailers and landlords remain in a precarious situation that could lead to substantial numbers of redundancies as soon as tenant protections expire."

Chartered surveyors Ash & Co believe the full picture of the situation for both sides was only starter to become clearer since the relaxation of lockdown restrictions.

Simon McKeag,  a partner at the Gloucester firm, said: "We haven't witnessed a significant increase in vacancy rates to date as most landlords have been willing to assist tenants where possible, with rent holidays commonplace.

"The full effect of the pandemic will only become clear as the lockdown continues to ease and shops reopen.

"Unfortunately, some businesses may not return to pre-lockdown levels and both landlords and tenants will need to communicate to agree a way forward."

The Federation of Small Businesses said the code of practice was a first step forward to a more permanent solution.

Chairman Mike Cherry said: "The code marks a starting point for longer-term conversations - we hope to see landlords not just signing it, but embracing the principles it seeks to promote and taking a generous approach to looking after their small business tenants."