Dragons' Den favourite Levi Roots has been made an Honorary Fellow of the Royal Agricultural University (RAU) for his contributions to entrepreneurship and food. 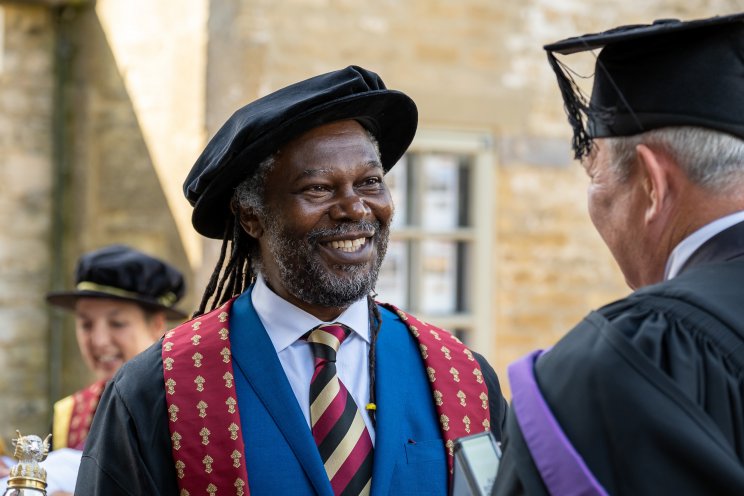 Levi famously secured investment from Peter Jones and Richard Farleigh on the BBC2 show with his Reggae Reggae Sauce, after opening his pitch with a song. He went on to create a global brand including sauces and seasonings, ready meals, books, soft drinks and snacks as well as his music.

The entrepreneur has been advising and mentoring in schools, colleges and universities for many years, including a decade-long association with the RAU in Cirencester. He is a regular judge on the university's Grand Idea competition for young entrepreneurs, alongside other leading business figures such as Julian Dunkerton, co-founder of Superdry.

He also attends prisons giving motivational talks and speaks about his own experiences. Levi recently signed a deal to have a feature film made about the story of his life.

Levi said of the award: "It's been an incredible journey from arriving in the UK as a boy who couldn't spell his first name, to becoming an Honorary Fellow of the Royal Agricultural University.

"The RAU has entrepreneurship in its DNA, and I've been inspired and privileged to watch that characteristic bloom in its students over the years. Some of the most exciting ideas I've seen recently have come in disciplines like agri-tech and food security, areas where so many of today's graduates will go on to benefit society.

"Helping all young people develop their business ideas and grow in confidence, knowing that the deal is out there for them, is really important to me. My message has always been that if I can do it, anyone can. Think about your personal brand and what makes you unique - everyone has that 'something' inside them, wherever they come from."

The Honorary Fellow joined around 460 students at Cirencester Church of St John the Baptist, graduating in subjects including Agriculture, Food, Environment, Real Estate and Rural Land Management, Equine Studies and Science, and Business.

Professor Joanna Price, vice-chancellor of the RAU said: "Levi Roots and is a visionary leader whose contributions to society and duty of service go hand in hand with his professional successes. He is an inspirational role models for our students and we are delighted to welcome him to our community of Honorary Fellows."