Gloucestershire Airport will undertake runway improvement work after securing up to £15million funding from the two councils which own it. 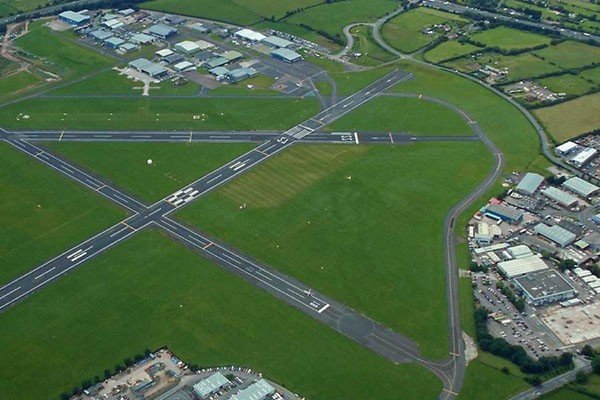 Cheltenham Borough Council and Gloucester City Council have agreed the funding, split evenly between them for work on two of the three runways.

Once the improvement work is completed, the third north-south runway is scheduled to close ahead of a planned development on 8.5 hectares between the existing Meteor and Anson business parks alongside Cheltenham Road East.

Once the runway improvement work is carried out, the Meteor Business Park would be transferred to the councils who would split annual rental income of £650,000.

In a joint statement, Councillor Steve Jordan from Cheltenham Borough Council and Gloucester City Council leader Councillor Richard Cook said: "The airport currently contributes around £52million annually to the local economy and plays a key role in supporting the county's development ambitions including the cyber development at Golden Valley and Gloucester's digital campus The Forum, as well as recovery from the Covid-19 pandemic.''

The surface of the main runway is beyond its design life of around 25 years and the need for the re-surfacing has long featured in Gloucestershire Airport's capital plans with work also including improving drainage, the installation of energy efficient LED lighting and to make sure the runway continues to meet Civil Aviation Authority guidelines.

A statement from the airport said: "The funding being made available is significant in that it gives us the go-ahead to deliver runway and other critical capital improvements.

"We anticipate refurbishing two of the three runways at the airport - our main runway and the crosswind runway.

"It is Gloucestershire Airport's intention in the long term to maintain a crosswind runway at all times, therefore our north-south runway will remain open while our crosswind runway is closed for refurbishment.

"When the refurbishment work to the main and crosswind runway has been completed, ultimately our north-south runway will close."

The final amount of the funding will depend on the final specification of the work after the tendering process.

"First and foremost it gives us the go-ahead to deliver runway and other critical capital improvements that will boost our status as a gateway for growth for the many significant developments being brought forward across the region.

"It will also play a vital role in realising our ambition to identify and deliver projects embracing alternative clean energy supplies and green technologies that will help reduce our carbon footprint, while also underpinning our long-term commitment to attract and promote associated aviation related environmental research and development that's so critical to the future of the aviation and creates opportunity for everyone operating from the airfield."

The funding received support from Councillor Jeremy Hilton, leader of the Liberal Democrat group on Gloucester City Council and a former director of Gloucestershire Airport Ltd.

He said: "Gloucestershire Airport is a great asset to the county and the deal to resurface and strengthen the main runway and the larger cross runway is a sensible investment.

"It will allow for heavier aircraft to land and take off. A few years ago the airport lengthened the main runway, but it has been known that it also needed to be fully resurfaced at some point. Now is the time to invest.

"The closure of the smallest cross runways will allow for Gloucestershire Airport to build a new aviation based business park."

He continued: "The transfer of Meteor Business Park to the two councils will provide the city council with an additional income of £325,000 per year to support our services.

"This is prudent investment, which the city Liberal Democrat group unanimously supported. We are strong advocates of maintaining a general aviation airport at Staverton."

Plans for the new business park, backed by nearly £1.9million of Growth Deal funding from GFirst LEP, have been lodged with Tewkesbury Borough Council.

They have been met with opposition from some aviation businesses based at the airport.