Could we all soon be driving on airless tyres?

We all know how annoying and expensive a flat tyre is. 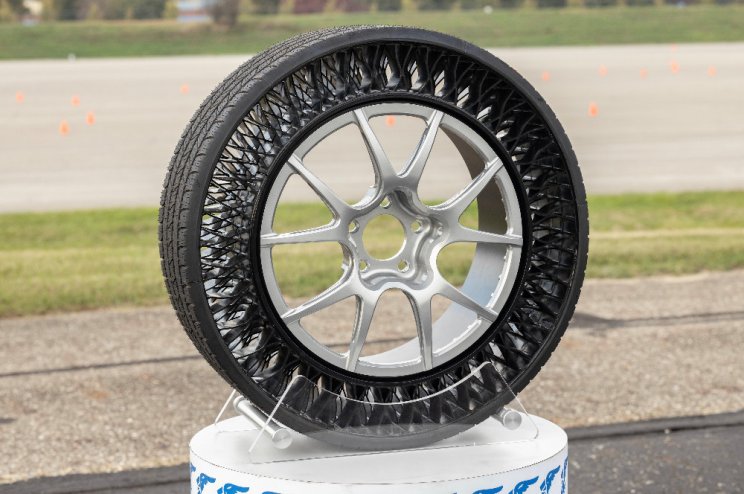 And for delivery and shuttle businesses, a car not moving it a car not making money.

But drivers of the future may not have to deal with the headache of a puncture thanks to a new breed of airless tyre.

Manufacturing giants Goodyear and Michelin are both developing the technology and they could be debuted as early as 2024.

American multinational Goodyear has made its prototype with special plastic spokes, supporting a reinforced rubber tread, which flex and contort as the car is driven.

Michael Rachita, Goodyear's senior program manager for non-pneumatic tyres (NPTs), told the BBC: "While air-filled tyres will always have their place, a mixture of solutions is needed. As we move into a world where autonomous vehicles are becoming more common and many cities are offering transport-as-a-service strategies, having a maintenance-free tyre is hugely important."

Meanwhile rival, Michelin, has been working with General Motors (GM) on airless tyres since 2019. In February there were media reports that its Unique Puncture-proof Tire System (Uptis) could debut on a new Chevrolet Bolt electric car being planned by GM, possibly as early as 2024.

Uptis tyres are made of high-strength resin embedded with fibreglass and composite rubber,for which Michelin has filed 50 patents, to create a mesh structure that surrounds an aluminium wheel.

Cyrille Roget, a scientific and innovation expert at the French tyre maker, told the BBC Michelin will have more to say later this year.

Michelin already has airless tyres on sale. Its Tweel (tyre-wheel) has been around since 2005 and is used for slow-moving vehicles, such as farm equipment .

Optimising the technology for road vehicles is a totally different challenge but Michelin has a bold multi-year plan to create a tyre that is airless, connected, 3D-printed and made entirely of materials that can be melted down and re-used.

Apart from occasional re-treads, it would be zero-maintenance, according to the company.

However, the black rubber air-filled doughnut we all know was first used on vehicles in the 1890s and isn't going anywhere soon.

And Mr Rachita was upfront about the limitations of its current airless tyre prototypes: "There will be noise, and some vibration. We're still learning how to soften the ride. But we think you'll be surprised at the performance."

However he said they were at a stage in development where they felt confident it was the "real deal".