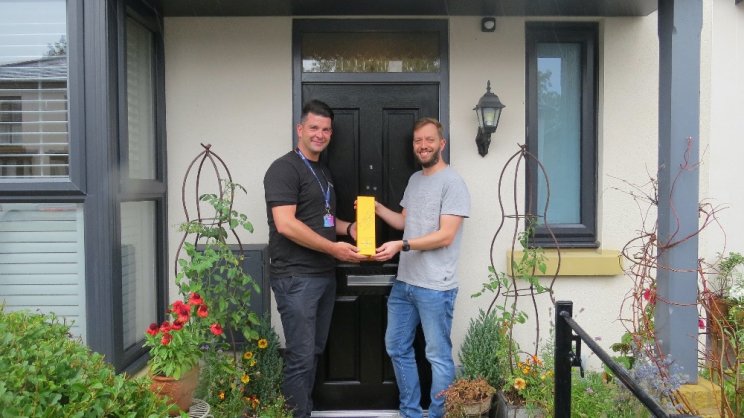 Joe and his wife knew they needed a reliable, fast broadband connection; as they both work from home and love streaming films.

YouFibre said it had presented Joe with a bottle of Champagne and has given the first year's full-fibre broadband service for free as a further 'thank you'.

Joe said: "We need a very fast and reliable broadband service, my wife and I both work from home, so we're often making simultaneous video calls throughout the day. We also love streaming films and can do so now knowing that they will never be interrupted at an extremely frustrating moment.

"We were delighted when YouFibre told us we were its first Cheltenham customer, the prices are so good, that I couldn't turn down the opportunity to switch to YouFibre from BT. Getting a year's free service is an amazing bonus."

Ryan Battle, managing director of YouFibre, added: "We're incredibly excited about welcoming Joe and his family as our first customer in Cheltenham. We're transforming the lives of people like Joe by providing hyperfast broadband speeds that can be relied upon."

"The broadband industry has overcharged and underdelivered for too long, we want to break the mould by providing a faster connection and a better service at lower prices. Everyone should have affordable access to fast internet, so a whole household can seamlessly work, live and play online. We've seen a real appetite for better broadband in Cheltenham and look forward to getting many more customers connected to the network soon."

The firm has also launched a range of new broadband packages in Cheltenham, including

YouFibre 500, which offers speeds of up to 500 Mbps, at just £30 per month, with three months free, £10 cheaper than the equivalent Virgin Media package.

And YouFibre's 1000 Mbps package, YouFibre 1000, now comes with YouMesh, which ensures Wi-Fi coverage in every room, free of charge (previously £7 per month).

It said speeds of around 500 and 1000 Mbps will ensure households and even most business broadband users will not only be able to do just about anything they want online, but that all of the family or those in the workplace can do what they want too, simultaneously.

YouFibre also offers hyperfast broadband services, with speeds of up to 10,000 Mbps, 156 times the UK average of 80.2 Mbps, on full-fibre networks.

YouFibre's services are based on wholesale, open networks built by other companies including Netomnia, the gigabit full-fibre network investor and builder. Netomnia announced in May 2021 that it has started constructing new broadband networks in Cheltenham and Stroud as part of its £30m investment in Gloucestershire.

All packages include unlimited usage, symmetrical download and upload speeds, a wi-fi router, a no price-rise promise within contract and 24/7 UK based support. And there is no install fee, 'activation' fee or line rental.