Cheltenham Music Festival has been nominated for a South Bank Sky Arts Award for the world premiere of the Thea Musgrave Trumpet Concerto in 2019, the Festival's 75th anniversary year.

The piece was co-commissioned by Cheltenham Music Festival, the City of Birmingham Symphony Orchestra in celebration of its centenary, and the Los Angeles Philharmonic.

Thea Musgrave was chosen for the commission in this anniversary year as she was the first female composer to be commissioned by the Cheltenham Music Festival in 1956. It was written for the festival's artistic director Alison Balsom to perform and was based on a series of paintings by Scottish artist Victoria Crowe. 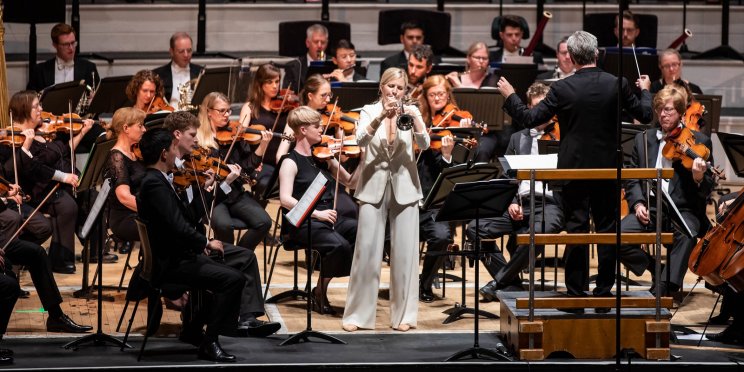 Up against Cheltenham Music Festival in the Classical Music category is Edinburgh International Festival's performance of Götterdämmerung, from Sir Andrew Davis and the Royal Scottish National Orchestra, and the Thomas Adès Concerto for Piano and Orchestra, performed by the London Philharmonic Orchestra with the piano soloist Kirill Gerstein.

Hosted by Melvyn Bragg, the South Bank Sky Arts Awards is the only awards ceremony in the world to acknowledge and celebrate every genre of the Arts, including dance, classical music, comedy, film, literature, opera, pop, theatre, TV drama and visual art.

Now in its 24th year, the annual ceremony will take place at the London Coliseum and will be free for everyone to watch on Sky Arts, Freeview channel 11, at 8pm on Sunday, December 20.

Phil Edgar-Jones, director of Sky Arts and Entertainment, said: "When I look at the list of nominees for the South Bank Sky Arts Awards it's simultaneously inspiring and heart-breaking. The talent and creativity on display is awesome but at the same time makes our lost 2020 more poignant and reinforces how much we need and miss our brilliant artists, actors, musicians, dancers and all-round entertainers."

The full list of nominees can be seen at https://www.skygroup.sky/article/nominations-revealed-for-the-south-bank-sky-arts-awards-2020