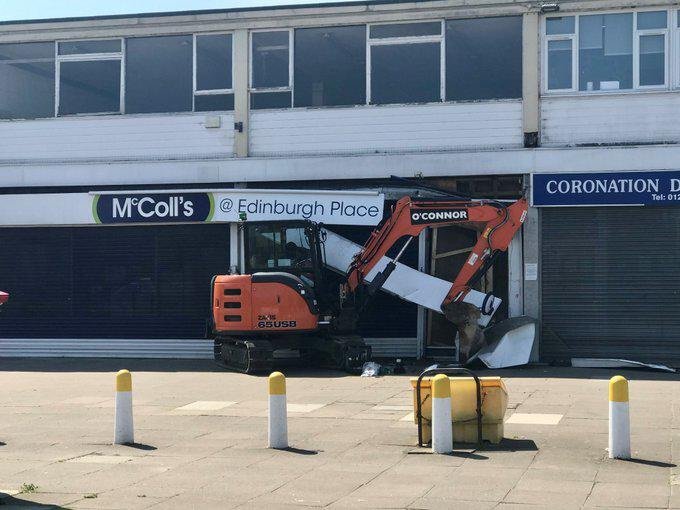 A 41 year old Cheltenham man who smashed a wall with a mechanical digger in an attempt to steal a cash machine from a Cheltenham shopping parade - causing £40,000 damage in the process - has been jailed for two years.

Jamie Geisdorf hatched the 'madcap' scheme to get money in a hurry because he was being threatened by neighbours who blamed him for a £6,000 theft that occurred on the day of his father's funeral, Gloucester Crown Court was told on Friday (July 23).

Geisdorf did not carry out any planning for the raid and as he fled the scene after failing to get any money out of the cash machine he gave a wave to shocked staff of a nearby Iceland store who had just witnessed the incident.

The court heard it happened at around 4.50am on May 31st this year and police quickly police received a number of calls reporting that a an was using a digger to attack the wall of MColls in Coronation Square, Cheltenham.

Witnesses who alerted the police included a cleaner working in BetFred next door and staff at the neighbouring Iceland store.

Prosecutor Simran Kamal said: "Another witness, Mr Reeves, a lorry driver, who was making a delivery, gave the police an accurate description of the man, as skinny, 5' 7" tall, wearing sand-coloured shorts and a high-vis jacket."

Officers suspected from the description that this was Jamie Geisdorf, 41 of Edinburgh Place, Cheltenham, said Mr Kamal.

"When police arrived on the scene Geisdorf had already fled. The officers quickly established that the red mechanical digger had been stolen from the rear of the shops where building work was currently being undertaken.

"CCTV shows Geisdorf driving the vehicle from the yard to McColls, after causing damage to where it had been stored. He demolished a bollard in the pavement as he drove through to the front of the store."

The court was told that Geisdorf did not manage to get the cash from the machine despite his heavy duty attempt - but he did cause in the region of £40,000 worth of damage to the convenience store building. The shop lost four days of trading as a result.

Judge Michael Cullum asked how much money was in the machine, but the prosecutor said she didn't have that information.

The judge said that as he didn't know if the ATM was nearly empty or had just been filled up, he would assume that it contained only a modest amount.

Matthew Harbinson, defending, said: "Prior to this, Geisdorf, who was under a suspended sentence order, had reported to his probation officer, his housing officer and to the police that he had serious concerns over his personal safety and that of his family.

"Geisdorf had just held a wake for his late father. Some of the attendees, although not Geisdorf, engaged in some criminal activity at a nearby property.

"Somehow, other people blamed Geisdorf for the theft of items and he became the subject of continued harassment and it was alleged that he owed them £6,000.

"Geisdorf then came up with this madcap idea of stealing the cash machine to obtain money in a hurry. He waved at the Iceland staff as he fled the scene empty handed!

"He does not seek to minimise his offending but says it was committed under duress as threats to his life had been made by these individuals. He said that there was no real planning involved."

At an earlier hearing Geisdorf had told the judge: "Somehow I have been left with a debt of £6,000 which is nothing to do with me. The next day I was visited by the heavies asking for the money, but I was able to defend myself.

"About a week later I was again threatened by others who warned me that if I don't pay them the £6,000 by a certain date my life would be in danger. I was so desperate that I knew nobody would lend me the £6,000. I was at my wits' end.

"I made the stupidest mistake ever in taking the digger and attempting to take the cash point machine. But I felt this was my only option."

Geisdorf admitted the attempted theft of the ATM, aggravated taking of the digger, criminal damage to the building and using a vehicle without insurance. The burglary charge Geisdorf originally faced was withdrawn because he did not physically enter the building.

Judge Cullum told Geisdorf: "You have an unhelpful list of previous convictions. You frankly lost the plot in carrying out this attempted theft of the cash machine. It was a totally and inappropriate solution to a really difficult situation that you found yourself in.

"You accept that you will be going to prison today as the offence is so serious. There was limited planning in obtaining the digger, but you had the intention of causing serious damage as a by-product of your scheme.

"I don't feel you really thought this through at all and I accept you were acting out of desperation, having run out of legal avenues to protect your family over a totally unwarranted debt.

"Quite clearly you did cause serious damage. The level of damage was unusually high."

The judge sentenced Geisdorf to a jail term of 24 months and disqualified him from driving for 12 months from the day he is released from prison.