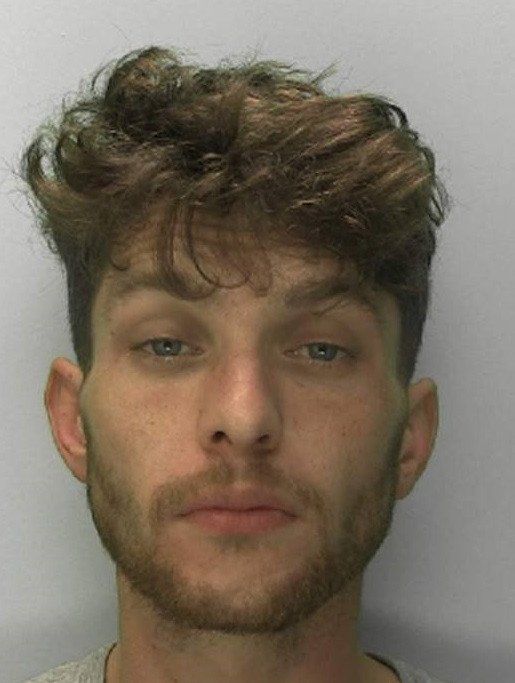 A drug dealer who also stole high-end designer goods from department stores in Cheltenham during a three day shoplifting spree has been jailed for 32 months.

The owner, Marian Bulgaru, had locked it up at 11am that day but when she returned at 9pm the bike was missing. CCTV revealed that Hallam had used bolt cutters to steal it.

Ms Alwin said: "At the John Lewis store on June 29, Hallam was seen acting suspiciously by security guards who checked the CCTV and at 4.42pm he was seen stealing Gucci perfume, valued at £70, and a Paul Smith T shirt valued at £45. These items were not recovered.

"On July 4 Hallam entered the House of Fraser store where he walked out the shop with a total of £211 worth of goods under his arm.

"Some 20 minutes later Hallam re-entered the John Lewis store and stole two bottles of Versace perfume valued at £38 and £88.50 and ran out of the store chased by two security officers.

"When Hallam went into the House of Fraser store on July 13th the security team spotted him immediately and he was followed at a distance while another officer monitored his movements on CCTV.

"Hallam picked up four items of Calvin Klein clothing and bottles of perfume, worth a total of £433.50 and walks past the tills making no attempt to pay for the items.

"The security officers then challenge Hallam, who throws down the items and runs away. The items are recovered."

The court was told that police officers were on patrol in Hester's Way in Cheltenham on September 17 where Hallan was seen loading a bike into a van, raising suspicion that he had previously been involved in a bike theft, and they went to speak to him.

Ms Alwin added: "Hallam runs away towards a block of flats and runs up the stairs. One of the occupants later told the police that Hallam had stashed a number of items in the communal bins in the stairwell.

"The police make a search of these bins and find a set of electrical scales and a cigarette box that contains several wraps of crack cocaine and heroin, and one large 17.84 gram lump of heroin. The total value of the Class A drugs was around £1,810.

"When the police eventually caught up with Hallam he had £150 on him, a crack pipe and a mobile phone with 84 messages relating to the supply of heroin."

The court heard that in interview Hallam said he was thieving to fund his drug addiction. He explained that his life had spiralled out of control following a break up with his partner.

Guy Wyatt, defending, said: "I would urge the court to defer sentencing Hallam for three months to show that he can abide with any conditions imposed on him.

"Hallam was only dealing drugs for just a few weeks but was also shoplifting during this period.

"It was when he was spotted loading a bike into a van that he came to the attention of the police, not for any drug offending.

"Hallam was street corner dealer, being controlled by somebody at the sharp end higher up the chain of command. He was not operating a county lines drug phone.

"Until recently he had been a hard working family man who supported his children. However he did leave his previous employment because of his drugs problem but he says he has had the offer of further employment if he is not jailed today."

Hallam previously pleaded guilty to four charges of theft, on June 29 and July 4, from John Lewis in Cheltenham, and from the House of Fraser store on July 4 and July 13 and the theft of a pedal cycle on June 27. He also admitted the possession of class A drugs with intent to supply on September 17.

Judge Michael Cullum said to Hallam: "Yours is a sad tale of the destructive nature of Class A drugs.

"It dragged you down from a hard working family man to somebody who was working for others selling drugs on a street corner, delivering them and being in being in possession of the drugs phone, which was the essential part of the supply line.

"You had around £2,000 class A drugs on you when your enterprise was stopped. I accept that you were an addict and committed a number of theft offences to pay for your habit.

"It was your solution to what would have looked like a desperate situation in trying to pay back the debt to your own dealer. It's a solution that perpetuates the cycle of putting other people into this line of addiction.

"The fact of the matter is that people who sell Class A drugs go to prison. And in your case you are being sentenced to two years and eight months in prison."

The judge also ordered that Hallam pay the victim of the bicycle theft £150 compensation and he ordered the forfeiture and destruction of the drugs and relevant paraphernalia. He also ordered Hallam to pay a victim surcharge of £150."