The biggest change to Cheltenham since the spa town boom of the 18th century has taken a significant step forward.

Cheltenham Borough Council have agreed a £37.5million deal to acquire 45-hectares of development land to the west of the town.

In a presentation made at Gloucestershire College this morning it was confirmed that it was the biggest single purchase ever made by Cheltenham Borough Council.

The land has been earmarked to become part of the Cyber Central development that will in the words of the council see a "world-leading business hub for cyber technology" created in Gloucestershire.

The scheme is part of a larger 132-hectare proposal that would see a huge swathe of land to the west of Cheltenham become what the council are calling a "pioneering Garden Village community."

The Cyber Central scheme is being developed in partnership with Tewkesbury Borough Council, Gloucestershire County Council and GFirst LEP.

It will include Cheltenham's Cyber Innovation Centre which was included in the Government's Spending Review in 2015.

The centres will provide a base for innovators and cyber start-ups to develop products concepts and ideas in a barrier-free environment of collaboration between industry, academia and government.

By purchasing the 45 hectares of land within the borough boundary, Cheltenham Borough Council becomes a major landowner within the Cyber Central Development.

In a statement, the council say being landowner will allow the town to have "greater control to ensure the project achieves its full potential as a world-leading community for cyber technology. 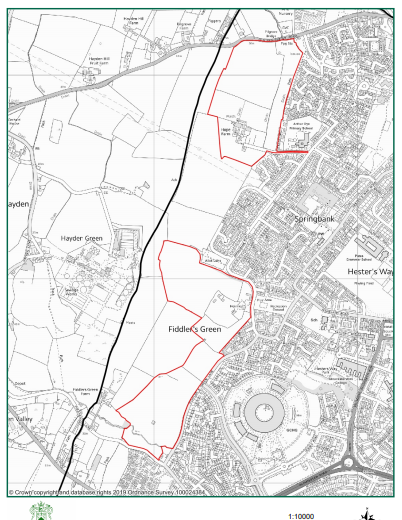 The statement adds: "The acquisition supports the council's corporate strategy to invest in delivering long-term social and economic benefits for the town."

Members of the Gloucestershire business community and media were shown the outline plans for the Cyber Central development at a special launch event at Gloucestershire College in Cheltenham.

Cheltenham has been at the heart of cyber technology since the Government Communications Headquarters, GCHQ, moved to two sites in the town in the 1950s.

The bases at Oakley and Benhall were consolidated into the new Doughnut design in the 1990s on the Benhall site, close to where the Cyber Central development will be.

The Oakley site was decommissioned and is now a housing estate and Sainsbury's supermarket.

READ MORE: "This is more than just a business park, it's a development of national importance."

READ MORE: Where Cyber Central will be built and how it will change Gloucestershire