An economic intervention that is unprecedented in the history of Great Britain has been made by Chancellor Rishi Sunak in a bid to protect jobs and incomes in the face of coronavirus.

In a generation-defining string of announcements made alongside Prime Minister Boris Johnson, Mr Sunak wrote a new fiscal rule book with a raft of changes.

He said: "The economic intervention is unprecedented in the history of the British state it will be one of the most comprehensive in the world. 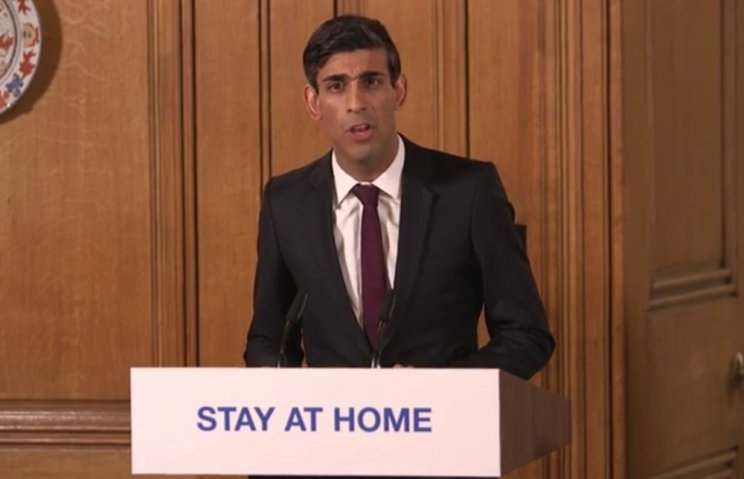 "There will be a collective national effort with everyone having a role to play. People, businesses, government, it's on all of us.

"Our plan for people's jobs and incomes will protect jobs, offer more generous support for those without incomes, strengthen the safety net for those who work for themselves and help people stay in their homes."

At the heart of the announcement was the new Coronavirus Job Retention Scheme that is being introduced with immediate effect.

"I can announce for the first time in our nation's history, the government will step in to help pay people's wages," Mr Sunak said.

"We're setting up a new Coronavirus Job Retention scheme. Any employer in the country, small or large, charitable or non-profit will be eligible for the scheme.

"Employers will be able to contact HMRC for a grant to cover most of the wages of people who are not working, but furloughed and kept on pay-roll rather than being laid off.

"Government grants will cover 80 per cent of wages for retained workers up to a total of £2,500 per month.

"That's just above the median income, of course employers can choose to top up salaries further if they choose to.

"That means workers in any part of the UK can retain their job even if their employer can't afford to pay them and be paid at least 80 per cent of their salary.

"The Coronavirus Job Retention Scheme will cover the cost of wages backdated to March 1 and be open initially for at least three months and I will extend the scheme further if necessary.

"I am placing no limit on the amount of funding available for the scheme."

"We said we would stand together with the British people and we meant it. We have never had a scheme like this in our country before and we are having to build our systems from scratch.

The chancellor also added new measures to protect businesses that are "hurting now."

The Coronavirus Business Interruption Loan Scheme will now be interest free for 12 months, not six as previously announced and be available from Monday.

A further announcement will be made next week to ensure large corporations are able to access the credit they need as well.

"That is a direct injection of cash to businesses of around £30billion, equivalent to just over 1per cent of GDP," he said.

"Let me speak directly to businesses, I know it's incredibly difficult out there. We in govermnemnt are doing everything we can to support you.

"We're paying wages up to 80 per cent, so someone can be furloughed rather than laid off to protect their jobs.

"We're deferring over 30billion of taxes until the end of the financial year.

"We're supplying cash grants of up to £25,000 for business properties. The government is doing its best to stand by you and Iam asking you to do your best to stand behind your workers."

But that was not all, measures were also made to "strengthen the safety net" of welfare and to protect the self-employed

"We are starting a great national effort to protect jobs. But the truth is we are already seeing job losses and the truth is there may be more to come.

"I cannot promise you that no-one will face hardship in the weeks ahead, so we will also act to protect you if the worst happens.

"To strengthen the safety net I am increasing the universal credit standard allowance for the next 12 months by £1,000 a year.

"For the next 12 months, I am increasing thweworking tax credit allowance by the same amount.

"I am strengthening the safety net for self-employed people too, by suspending the minimum income floor for anyone affected by coronavirus.

"Self-employed people can now access, in full, universal credit at the rate of statutory sick pay for employees.

Taken together, I am announcing an extra £7billion of extra through the welfare system to protect people's incomes

"To strengthen the support through the tax system, I am deferring the next self0assessment deadline to January 2021."

Finally, support was given to renters, with £1billion of support to Housing Benefit and Universal Credit to allow a local housing allowance to cover at least 30 per cent of market rents by area.

Concluding, Mr Sunak said: "The actions I have taken today represent an unprecedented intervention to support jobs and incomes of the British people.

"Now more than at any time in our history we will be judged by our capacity for compassion.

"Our ability to come through this won't be just down to what government or business do, but by the small acts of compassion we show each other.

"The small business that does everything they can not to lay-off their staff.

"The student who does a shop for an elderly neighbour. the retired nurse who volunteers to cover some shifts in their local hospital.

"When this is over, and it will be over, we want to look back on this moment and remember the small acts of kindness done by us and to us.

"We want to look back on this time and remember how we thought first of others and acted with decency.

"We want to look back on this time and remember how in the face of a generation-defining moment we stood together and took a great national effort and we stood together. It's on all of us."

Create your own user feedback survey