Small businesses, pubs and Conservative backbench MPs have all called for the Government to relax the two-metre guideline for social distancing. 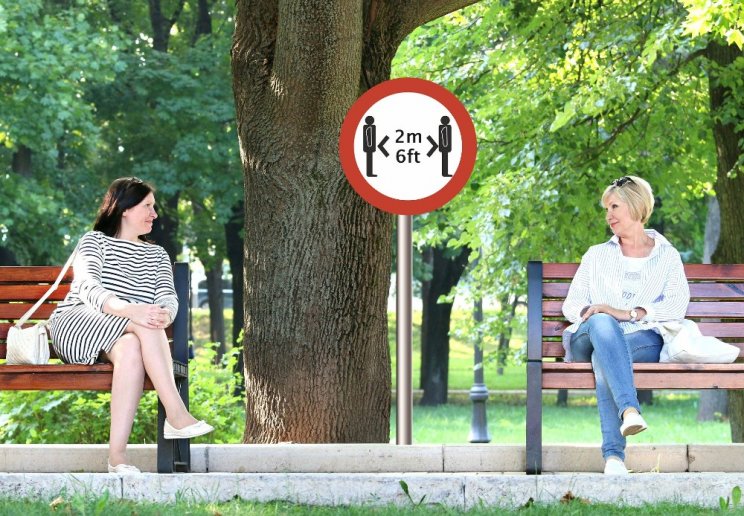 Prime Minister Boris Johnson said the two-metre rule was under constant review, but stressed caution was needed ahead of the reopening of non-essential shops and outdoor attractions from Monday.

The UK's chief scientific adviser Sir Patrick Vallance added: "It is a risk-based assessment on when risk reduces and the risks are associated with distance, so risk falls after two metres."

The Federation of Small Businesses believes the distance needs to be changed as soon as any review allows to allow more firms to return.

"As we increasingly look to recovery - and hopefully the return of outdoor restaurant, pub and cafe spaces as early as next month - we need to see social distancing guidelines kept under constant review.

"Many in the hospitality and leisure sectors simply won't be able to turn a profit if the blanket two metre rule remains in place."

He continued: "Small businesses across some European countries have benefited from a shortening of this distancing benchmark as part of unlocking processes.

"If the UK experts say a similar move is possible here, then we need to see that change enacted. Time is of the essence during these critical summer months."

He also called on the Government to provide help for small businesses to cover the cost of getting ready to reopen.

"Reopening safely comes at a cost to small businesses," he said. "That's why we're calling for the introduction of back to work vouchers for small and micro firms to help cover these additional outgoings after months of little or no revenue.

"The raft of emergency government measures brought in to support the small business community have protected millions of livelihoods.

"Now we need to look to the longer-term, and the reduction in employment costs, investment in infrastructure and skills, and tax reform that will be needed to bring us out of this recession."

With pubs unable to open until at least July 4, the British Beer & Pub Association has repeated is call for the Government to review the two-metre rule.

It says only around 12,500 of England's pubs could reopen under the current guidelines, but that figure rises to 28,000 (around 75 per cent) if one metre distancing recommended by the World Health Organisation is introduced.

BBPA chief executive Emma McClarkin said: "No reduction in the two metre social distancing guidelines will severely restrict the recovery of our sector.

"Countless other countries from across the world are using one metre for social distancing as advised by WHO. Why can't we?"

She continued: "It's not too late though for the Government to review this, as its being suggested they are, and for them to adopt one metre for social distancing.

"Failing this the Government must detail a package of financial support to sustain pubs and brewers through this prolonged period of closure and to help stave off mass job losses."

Calls for a change in guidelines have also been made by Conservative MPs with former cabinet ministers Sir Iain Duncan Smith and Damian Green saying it is essential for the economy.