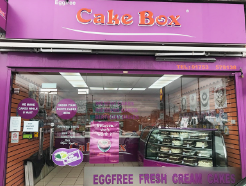 Despite the pandemic, sweet treat retailer Cake Box is looking to open 52 new shops around the country as evidence that there is still confidence in the High Street.

Eggfree Cake Box, which opened a shop in Gloucester's Northgate Street at the end of February, enjoyed a strong year with online sales growing by 84 per cent.

The cream cake retailer told shareholders on Monday morning that it also saw like-for-like sales grow by 14.7% over the 40 weeks from June to March after sites reopened following the first lockdown.

Chief executive Sukh Chamdal opened his first Cake Box shop in East London in 2008 with his cousin, having been inspired to start it up after his daughter asked for a cake without eggs in it.

Chamdal was reported as saying: "Our tested recipe of backing our franchisees has helped us deliver another year of growth, and it is thanks to the dedication of them and everyone in the Cake Box family that we have been able to emerge stronger from a year marked by the global pandemic."

Cake Box said it had not used any public support measures during the second half of the fiscal year and was forecasting adjusted pre-tax profits to be in line with market expectations.

In the past year, Cake Box opened 24 franchise stores, taking its estate to 157 across the UK at the end of last month.

Hari Bollineri, manager of the Gloucester Cake Box shop, told Punchline that things had gone well since they opened for business seven weeks ago.

"It's been good," he said, adding that the shop employed 15 people in all with about five members of staff working on site at any one time.

Cake Box's website says: "All of our products are 100% egg free. The founders of Eggfree Cake Box follow a strict lacto vegetarian diet, and that is how they came up with the idea for the company.

"While all of our cakes are eggfree, you really can't taste the difference, meaning that it is a safe choice for a party where you are not sure if anybody has any egg allergies."