Amnesty results in more than 300 weapons taken off Gloucestershire's streets

Gloucestershire Constabulary's knife and weapon amnesty has ended with more than 300 bladed items surrendered in the past two weeks. 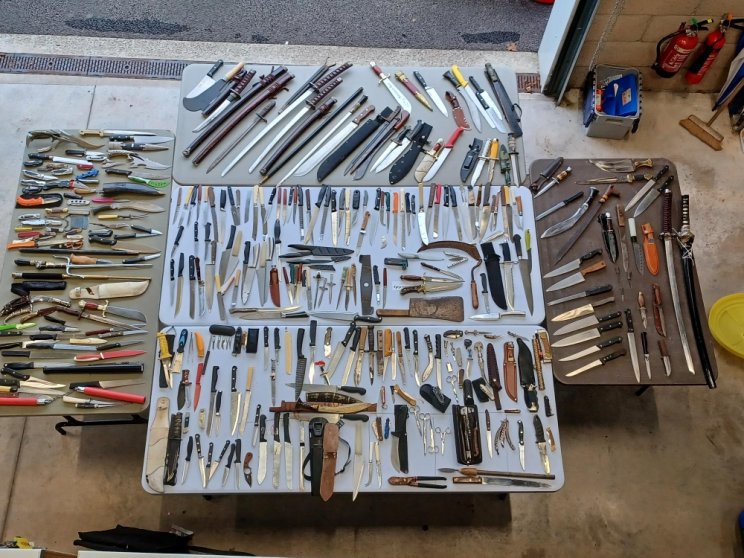 The seven amnesty bins that were located at police stations across the county have been taken to our operations base and opened.

Of the items handed in there were 317 knives of various types, three batons and one nunchucks.

Guns were also put in the amnesty bins, including four shotguns. three imitation firearms and one air weapon. A number of ammunition rounds were also handed in.

Chief Inspector Carl Bourne said: "I'd like to thank the public for their support during this campaign. We are confident that we have started a conversation in many households about weapon ownership and knife crime.

"The vast majority of the knives that were handed in are now classified as illegal to possess in your home address after a recent change in the law. Some items that fall into this category are; butterfly knives, disguised knives, flick knives, zombie knives and swords.

"Any number of weapons put in the bins is a success. Every single one is taken off our streets and now won't be causing any potential danger. The knife surrender is over but our work isn't. We will continue to work hard to prevent violent crimes in Gloucestershire."

Gloucestershire Constabulary said the weapons handed in will now be destroyed.

The surrender was part of a national campaign called Op Sceptre, aimed at tackling knife crime.