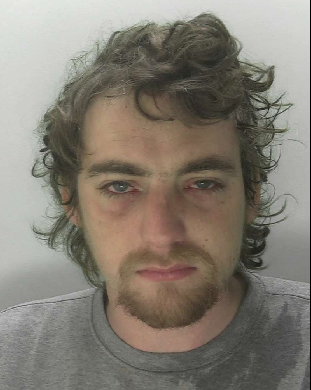 A 29-year-old Stroud man has been jailed for 20 weeks for spitting in the face of a security guard and telling him "I hope you die a horrible death."

At Cheltenham Magistrates Court yesterday prosecutor Charlotte Hunt said that Ricky Baker, 29, spat in the face of a security guard helping Gloucester City Council at the Central hotel in the city's Clarence Street during the current Covid-19 pandemic on April 9.

Baker had been homeless and street sleeping at the time the coronavirus lockdown was imposed and he had been accommodated at the Central Hotel by the council.

Ms Hunt added: "The security guard was asked to attend Baker's room to and escort him from the premises after he had been warned about his behaviour.

"This is when Baker became aggressive and spat in the face of the security guard. He then laughed at him and said, 'You've got it, I hope you die a horrible death as you are infected now'.

"Baker continued to hurl abuse at the guard as he was being escorted out of the hotel. He then clenched his fist and threatened him again by spitting on him again, this time the phlegm landed on his leg."

Baker, formerly of Lawnside, Stroud, admitted two charges of common assault by spitting at a security guard on April 9, having pleaded not guilty at a hearing on Easter Saturday, when he appeared at the court for the second time via video link from prison.

Tim Burrows, defending, said alcohol was the issue and added: "At the time of the incident Baker was street homeless prior to the coronavirus pandemic. He was living at the Central Hotel and he was being evicted because of his ongoing behaviour.

"I have warned him that in the current climate he faces a custodial sentence. The evidence is over whelming.

"Ordinarily we'd be looking at assistance from probation, but we are in unusual times.

"He'd been dry/sober for 13 days when he had a relapse. He was still under the influence of alcohol when he first appeared at this court just over a week ago.

"Baker has had time to sober up and reflect on his actions whilst being remanded in custody and has pleaded guilty to the two charges today."

District Judge Joanna Dickens told Baker: "Spitting in the face of an emergency worker is incredibly serious. You have been told how serious it is.

"Spitting at people, who are doing a public service job, even in normal times, is just not acceptable.

"I appreciate that you were not happy about being evicted, but spitting at someone in the current climate could be a death sentence to the security guard.

"The way you dealt with it was made worse by you laughing at him and saying what you did was absolutely outrageous. He must have been terrified by your actions and the comments you made.

"And by law I have to impose the maximum sentence I can and that is a prison sentence of 20 weeks.

"Previously the court might have considered an alternative punishment by ordering you to undertake an alcohol treatment programme, but we are now living in different times."

The judge also ordered Baker to pay £100 compensation to the security guard.