Bishops Cleeve FC has been able to revamp the car park at its home ground thanks to a £20,000 donation from a local housebuilder.

Vistry Cotswolds - part of the Vistry Group which incorporates Linden Homes, Bovis Homes and Vistry Partnerships - made the contribution to help transform the area into a safer place for pedestrians. 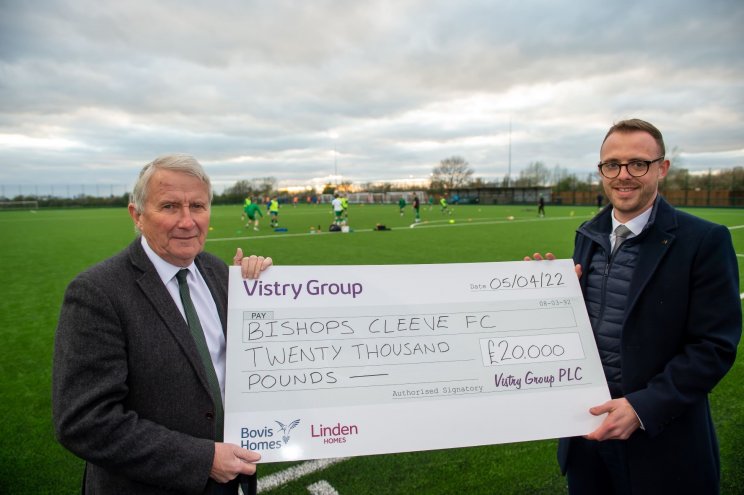 The funding has enabled the club to line out and tarmac the car park, upgrading it into a wheelchair and pushchair-friendly space.

Bishops Cleeve FC, which was founded in 1905 and is based off Kayte Lane in Southam, is an FA Charter Standard community Step 5 club playing in the Hellenic League Premier Division, and following winning the league this season have been promoted to the Southern League Division One.

"The car park has been needing an upgrade for a while. We are therefore extremely grateful to Vistry for providing this donation which has enabled us to carry out this much-needed work.

"The transformation has been fantastic for the local community as it is now a much safer space, particularly for wheelchair users and families with pushchairs."

Sup Ray, managing director of Vistry Cotswolds, said: "Supporting community projects such as these is a priority for us, particularly when we're building new homes nearby. This significant contribution towards the upgrade of Bishops Cleeve FC's car park is a prime example of our commitment to assisting grassroots organisations which help enrich the lives of local people.

"It's been great working with the club on this project and the finished result is there for all to see. We're extremely pleased to have helped make the car park a safer place for everyone who uses it, both now and in the years to come."

Vistry is currently building a range of two, three and four-bedroom homes at Linden Homes' Woodland View in Bishops Cleeve, off Gotherington Lane, and a selection of two-bedroom apartments at Bovis Homes' Spectre Hill off Barley Road near the village of Pittville in Cheltenham.