A £1million pound fine imposed on a Stonehouse company after two workers were burnt badly in an 'accident that was waiting to happen' has been cut by £400,000 by an appeal court.

Delphi Diesel Systems Ltd successfully appealed against the sentence to a judge and two JPs at Gloucester crown court last Friday and the fine was reduced to £600,000.

The court heard that the two workers at the vehicle parts factory, Josh Begg and Jordan Hole, had been asked to clean a distillation tank - part of a component washing system - when the chemicals they were using caught fire and exploded.

Mr Begg was so badly burnt that he was off work for three months, the court was told. 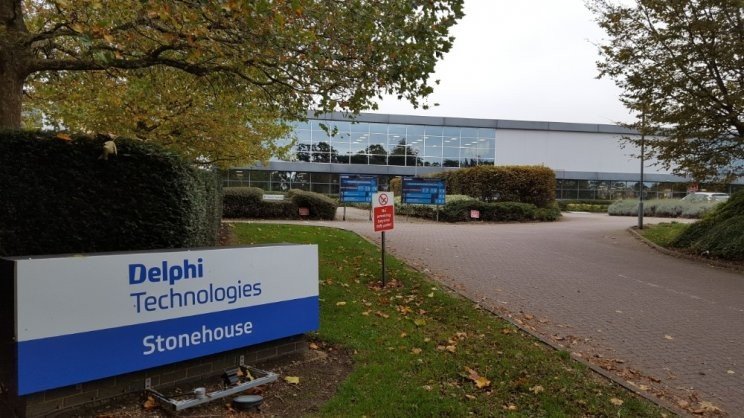 Prosecutor David Sapiecha said: "The Durr washer was a machine that needed regular maintenance. On this occasion technicians from the German manufacturer were on site overhauling the machine and asked two the Delphi employees to clean the 'crud' from inside the tank.

"Mr Begg and Mr Hole began by using an electric brush to break up the sediment at the bottom of the tank but they realised this wasn't effective and resorted to using a specialist aerosol cleaner with wire brushes.

"The spray cleaner is highly inflammable and is a skin and eye irritant and should only be used in well ventilated areas.

"The men, wearing only their work tee-shirts and safety glasses, did not have gloves or a mask when they were cleaning the tank.

"The incident occurred when one of them put his arm into the only ventilation aperture in the tank and in using the aerosol cleaner and the wire brush together caused the vapour to ignite creating a flashback.

"The flame rushed out of the tank. One of the men's tee-shirts caught fire and he rolled over to put out the fiame and both tried to get away covering their faces with their arms.

"Both men were taken to the first aid unit while other employees used a fire extinguisher to put out the fire in the tank.

"In the first aid unit there was an attempt to use an emergency shower to wash of the chemical liquid from the men, but the shower didn't work as there was no water coming from it.

"Both were taken to hospital in Gloucester and then to the burns unit at Southmead in Bristol.

"Mr Hole was released later that day while Mr Begg spent five days in hospital and he didn't return to work for three months."

Mr Sapiecha said the two men had been with the company for six years before the incident, having worked their way up from apprentices to become supervisors.

Mr Hole was released after a couple of hours at the specialist burns unit in Southmead Hospital. He had to use special creams on his skin for a period of time.

Mr Begg was much more seriously injured. He initially had a shower in the hospital in Gloucester because the PH on his skin was too high.

He was then transferred to the specialist burns unit in Southmead Hospital in Bristol where he spent the next five days.

In his victim statement he said he was given morphine immediately on arrival at Gloucestershire Royal Hospital and was put in a shower for half an hour.

He was transferred to Southmead he was given more morphine. He described the pain as being 10 on a scale of one to 10.

The court was shown an album of photographs of his injuries.

He added in his statement that two nurses had to wash him daily and when he got home he had to be looked after by his family and his girlfriend, feeding him his meals and washing and dressing him for the following two weeks.

He had to have his wounds checked and changed on a daily basis.

His dressings were finally removed on July 26 and he was still taking pain killers.

He needed physiotherapy for his injuries. He suffered from flashbacks. He had specialist help with post traumatic stress arising from the incident.

He has ongoing problems over skin care on holidays and suffered financially during his three months off work in which he was unable to drive.

The court heard that the company had risk assessed its control of hazardous to health systems for the normal working of the machine, but had not carried out an assessment for the procedure of cleaning the distillation tank.

The company, based at the Brunel Way, Stroudwater Business Park, Stonehouse, Stoud, admitted breaching the health and safety at work regulations.

The judge, Recorder Malcolm Galloway, observed that the company's failure to produce a risk assessment for cleaning the drum was the fundamental reason why this incident occurred.

Mr Sapiecha added: "The breaches occurred over a long period of time.

"The aerosol cleaning product had been used throughout the company for a number of years and combined with a multiplicity of failings over the suitability over the safety regulations and the lack of emergency planning, shows that this incident falls well short of the industry standards."

Defending John Buchanan said: "The company accepts the cleaning aerosol agent was widespread within the company, but it was not generally used, if at all, used in confined spaces.

"The cleaning in this incident was not part of its annual maintenance, but was instigated by the manufacturer's technicians as it had become contaminated."

The judge observed that the cleaning of the drum had been dealt with in the same way on previous occasions during its regular maintenance programme.

Mr Buchanan continued: "The company went to great lengths to install the washer, which became operational in November 2014, and had carried out the various risk assessments required of it.

"But what occurred on this occasion was that the cleaning process had not been properly considered."

Judge Galloway, sitting with magistrates Susan Bruckel and Karen Czapiewski, said: "In effect the company had assessed the risks for the normal operation of the machine but had inadequately failed to assess the risk factor in cleaning the drum.

"The circumstances of July 11, 2017 incident are not in dispute. The washer was having a number of issues and required a number of engineers from Durr to go onto the site to carry out urgent maintenance on the machine.

"Two Delphi employees were asked by the technicians to clean the tank. The cleaning of the washer involved the use of a highly flammable material. It is understood that these two operatives had undertaken this task before. However, this task had not been properly risk assessed by the company.

"The aerosol cleaning product, widely used throughout the company, was not suitable for this type of work for a number of reasons, the most obvious being that it was highly inflammable, especially in confined spaces, particularly with electric drills and other items that could cause ignition.

"The incident created a domino effect. The two men used the aerosol solvent and a wire brush, the vapour of which ignited and caused a flashback, the shower was not working in the medical unit resulting in both being taken to hospital.

"The flammable aerosol being used to clean the drum in this way was in effect, an accident waiting to happen.

"We've examined all the evidence in this case and taken into account that the company has an average turnover of £667 million a year. However we have accepted the company's mitigation that while it has a high turnover, its profits are low.

"Although we have allowed the appeal this is no way a criticism of the district judge," said Judge Galloway.

"This is a re-hearing of all the evidence and we may have taken a different approach to Judge Joti Bopa Rai in reaching our conclusions."