Sleep talking leads to the funniest of conversations.

Good morning to everyone except my partner who, at 2am, mid-dream, sat bolt upright in bed and terrifyingly shouted into the dark: “Will there be a buffet?”

As an active dreamer, I took to recording myself. The finest idiocy was me giving a15 minute interview on the validity of cloning dinosaurs, cutting off their heads, glueing them onto headless corpses then reanimating them as a workforce for Aldi.

My ex, who works in restaurants, used to take orders out loud in his sleep. So I used to mess with him saying things like, “excuse me, I ordered the coffee cake” or “this steak is overcooked” and he’d get so flustered and say things like “right away, ma’am!” Hilarious every time.

Much better than a partner who rises bolt upright slowly, silently as if from the grave, turns her head to look at you in the darkness- and then after full 20 seconds (that’s a long time to be stared at in the dark) lies back down. Thought I was going to be murdered in my sleep.

Although the best one is when she woke me up, shaking me and shouting my name again and again.

6# Wrong man for the job

"They warned me of goblins. Cute but you can't trust him. They are sneaky. I'm currently in the bath with one (Pause) Scrubbing him clean" - I laughed so hard I couldn't go back to sleep. My husband didn't believe he said any of those words. Last sentence is a family favourite.

I have an active dreamer. Once he literally dived out of bed. (To save me). 🤣🤣
Another time he kicked me so hard I woke him up. He was not happy as "the ball was curling towards the net" to win Spurs the FA Cup. He never saw if it went in or not. He's never forgiven me.

I am a long retired Tornado pilot. My wife still vividly remembers being pushed forcibly out of bed as I shouted: “Eject! Eject!” 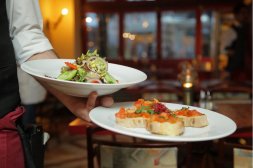 The dark side of serving

The customer is not always right.

These people were not afraid to make their opinions known.

Bizarre things that could have only happened in a pandemic.